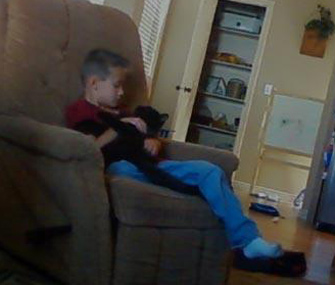 Courtesy of Tiandra Sazama
Rayden Sazama wrote to his local newspaper after a shelter error caused his cat's death.

A Utah boy's tragedy is pulling at heartstrings across the world, thanks to a letter that the 8-year-old wrote to his local newspaper about his cat's untimely death. Rayden Sazama composed the note after his pet, Toothless, was mistakenly euthanized by the Cache Humane Society — after the boy’s father turned up at the shelter to claim the cat. “Yesterday grown-ups killed my kitty, my best friend, when they weren’t supposed to,” wrote Rayden.

In the letter, published in The Herald Journal, Rayden lays out the sad turn of events that led to his cat’s demise: He and his 5-year-old brother began to worry when Toothless didn’t return home for two days, prompting them to go door-to-door in their neighborhood to ask people if they'd seen the cat.

Although none of the neighbors admitted to seeing Toothless, the family would later find out that some neighbors had actually played a part in the kitty's disappearance.

“I didn’t think big people lied because they are grown-ups and know what is right,” wrote Rayden. “Now I don’t know what to do.”

Once it was determined that Toothless was missing, Rayden’s father went to a local animal shelter just as it was closing — and there was Toothless, with his big green eyes and fluffy black fur, sitting inside a cage.

“When my dad made his funny meow sound that he does to make him come home, Toothless jumped up and came to the screen and rubbed up against it and was so happy to see my dad, and he wasn’t scared anymore," noted Rayden.

The shelter wouldn’t allow Rayden’s father to take the cat home until he paid a fee at the shelter's office the next day, but one of the employees assured him that he could pick up Toothless then.

But when Rayden's dad returned the next day, the shelter informed him that they didn’t have any fluffy black cats. Cache Humane Society Director Brenda Smith confirmed to The Herald Journal that an employee had neglected to write on Toothless’s cage that his family had claimed him.

“She had forgotten to leave a note to tell the people my dad would be there for Toothless, and they had just killed my cat that morning,” wrote Rayden. “She had just forgotten to write a note to save a member of my family. They killed him, and I don’t know why.”

Courtesy of Tiandra Sazama
Toothless was euthanized in error at the Cache Humane Society.

And there was even more to the story: Rayden's family ultimately found out that neighbors who didn’t like animals had trapped Toothless and had him taken to the shelter.

Rayden's mother, Tiandra Sazama, says that her son thinks it's neat that so many people are hearing his story — and if anything positive comes out of this tragedy, it's the valuable lessons that Rayden has learned.

"We realize that it's been good for Rayden, who's learned forgiveness," she says. "He went to the shelter and talked to the lady, and told her that he's not mad. He's learned that it's good to speak out about how you feel."

For its part, the Cache Humane Society posted this mea culpa on its Facebook page:

“The Sazama family was offered a new cat as part of the formal, in-person apology that was given to them. They turned it down saying they wanted to wait a while. The offer for them to get a new cat is on the table for them whenever they are ready to get one.”