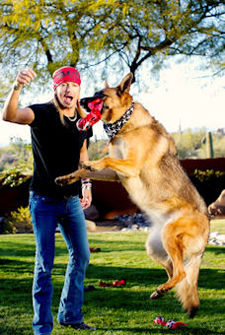 Petsmart
Michaels tosses a Pets Rock toy for one of his German Shepherds.

In addition to touring with the cult eighties band Poison and starring in the occasional reality TV show, Bret Michaels has found yet another way to occupy his time. The avid animal lover has launched Pets Rock, a line of accessories designed to “bring out the inner rock star” in cats and dogs, which debuts in Petsmart stores this week.

Skull-print doggie dresses, tennis balls wrapped in bandannas, plush tour bus toys, and “rock star looking for groupies” T-shirts are just some of the clever items you can pick up for your pet.

Vetstreet chatted with Michaels about his love for animals, his German Shepherd Dog product testers — and what it's like to share retail shelf space with Martha Stewart.

Q. Where did you get the idea for Pets Rock?

A. Michaels: “It started when I made stuff for my dogs that I thought was funny. I made a ball with bandanna material that I could throw. My two German Shepherds were going crazy playing with the stuff. I made the Pets Rock line very fun. It’s music-oriented — but not just rock 'n' roll. I’m also a huge fan of country music, so I kind of call it the rock in my country collection. We’ve already designed everything for Halloween and Christmas!”

Q. Any plans to expand the collection to include other critters?

A. “We haven’t officially decided that yet, but I imagine we’ll have fun in the fish and aquarium area. And you gotta move into the rat area, and hopefully reptiles — a lizard with some form of a leather jacket on. Faux leather, of course.”

Q. How involved are you in the design process?

A. “Petsmart has been unbelievably great to work with my crazy creative brain. They’ve been able to reel me in and make this stuff safe but also keep it fun. I design stuff, I call them, I text them and I send them pictures. They come up to the house, and we sit for hours and go through designs. It’s a very complicated process because they have to turn what I draw into reality. They have to think, ‘You need the door here to make it easy for them to get into the doghouse, so what if we do this?’ A lot of hard work goes into it. I guess you could say that, with me, there’s a lot of truth in advertising.”