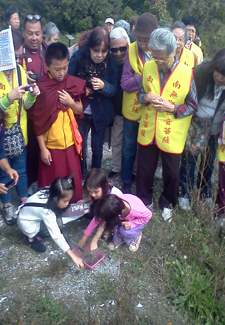 Lorri Cramer has been building good turtle karma for a long time. It started the day her nephew came running to her with a box turtle that had a cracked shell and broken legs. "He found two boys in the woods throwing it back and forth like a ball," she says. "He handed it to me and said, 'Can you fix it?'"

Cramer's only qualification for the task was that she loved animals. "I wasn't going to say, 'No, I'm not going to try.' But I didn't really think I could do anything with it," she says.

She brought the turtle back to her apartment in New York City and named it Lavinia — only finding out much later that it was male, because you can't determine a turtle's sex until it's mature.

In those days, she had to call veterinarians all around the country to find the few who knew about turtles. But little by little, she put together the information she needed to heal and care for him. (Today, there are plenty of licensed rehabilitators who have been trained to care for turtles and other wild animals. Even for people who are well-intentioned, it is illegal to take wildlife into your home. If you find injured wildlife, contact a local licensed rehabilitator.)

The Start of Something Bigger

Lavinia is still with Cramer, 33 years later — and he was the start of something much bigger. Since then, she has rehabilitated at least 1,000 turtles and tortoises for the New York Turtle and Tortoise Society. These reptiles end up in rescue in different ways. Some are pets who are given up, some are injured wild animals, and some are exotic species illegally released into an environment they can't survive in.

Over the years, there was one recurring problem of the last type that kept nagging at her. She'd get calls about whole groups of turtles in inappropriate places, like freshwater red-eared sliders found in the surf in Rockaway Beach.

"They'd all come in a cluster," Cramer says. She eventually discovered that they were being released as part of fangsheng, a Chinese Buddhist religious practice. She explains, "They had a very important ceremony called the Release Life ceremony, based on the premise that by going to the store and buying live animals and releasing them, you were giving them their life back, and that brought you good karma."

The problem was that translating this ceremony from China to New York City didn't work out well for turtles, which were often used for the symbolism of their long lives.

"When it started in China, it was people coming into the village to buy the turtle or the bird that had just been taken from someplace in the countryside," she says. "That was compassionate because they were releasing the animals back to the right environment."In contrast, releasing non-native species in New York City meant either death for the animals or, if they were lucky enough to be rescued, a lot of work for their rehabilitators.