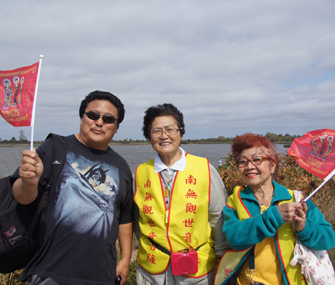 Photo by Dr. Russell Burke
Three members of the Buddhist community show their support after the turtles are released.

So for more than a decade, his team has been protecting the nests with wire cages and releasing the babies when they hatch. This happens almost daily in the fall, so a date was arranged for the Buddhists to visit the site. "I did a little program and told them about terrapins. Then we went out along the trail to some sites where I had hatchlings," Burke says. "We released them, they performed a prayer service over them, and it was very nice." During the last release, they began including birds, which Cramer says will allow ceremonies to happen more often because birds heal more quickly and don't hibernate. "So, during the winter and fall, birds will be released, and then during the summer, turtles will be released," she says.

People from a few other temples attended the last couple of ceremonies, sparking hope that the practice will spread to more temples. Says Cramer, "Eventually, what Benkong dreams of is that each Buddhist temple will adopt a wildlife center or wildlife rehabilitator and help support them, and the wildlife rehabilitator would offer them chances to say the blessing and to do the release ceremony."