Home ›
Our Pet Experts ›
Dr. Nancy Kay ›
Busted: What a Vet Exam Can Reveal About a Dog's Home

Busted: What a Vet Exam Can Reveal About a Dog's Home 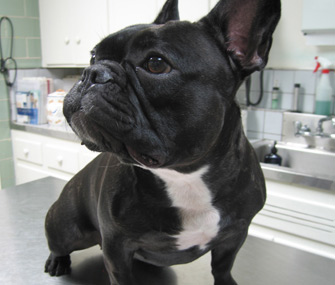 Every now and again, the sleuthing I do to diagnose what is ailing my patient ends up revealing some unexpected and sometimes embarrassing information about my client. Consider the case of Layla, an effervescent, adorable, 5-year-old French Bulldog. This little girl had experienced two neurological episodes during which she appeared depressed, minimally responsive, and unable to walk. The first episode lasted approximately six hours; the second was shorter in duration with milder symptoms. Dribbling of urine was noted throughout both episodes. Layla was reported to be completely normal otherwise, and normal is exactly how she appeared when I examined her.

I discussed the potential causes for Layla’s neurological events with her caregivers, a lovely couple in their forties. The possibilities included epilepsy, infectious or inflammatory brain disease, exposure to a toxin (none identified in the history), and a tumor or other structural abnormality within the brain. The next diagnostic steps would include an MRI scan of Layla’s brain and collection and analysis of cerebrospinal fluid. In addition to being pricey, these procedures would require general anesthesia.

After discussing all of the above information, I opted to ask one more question, and it went something like this: “I need to ask you a rather sensitive question. Dribbling of urine during a neurological event is rather unusual. However, the combination of urine dribbling and neurological symptoms is typical of marijuana toxicity in dogs. Any chance that Layla has had access to eating marijuana?” My two clients appeared stunned, looking at one another while shaking their heads in unequivocal denial. This prompted yet another question, "Does anyone else live with you and Layla?" And their response, "We have a 15-year-old son, and Layla does in fact spend most of her time in his room, but he would never...."

Hmm, I wondered just how far I should press this issue. I remembered how naïve I was with my oldest child. I also remembered discovering the brewery in our basement when my middle child was a junior in high school! Heck, these days, if marijuana is the worst thing a 15-year-old kid is doing, things are likely not all that bad! I tactfully attempted to share my parental wisdom with my clients and gently encouraged them to think about the things they did as teenagers. They both remained speechless, with expressions on their faces revealing that their minds were churning furiously.

I wrapped up the conversation by asking my clients if they preferred to proceed with the tests for which Layla was referred, or postpone such testing pending the results of a candid conversation on the home front. They opted for the latter. When I called them a week or so later to ask how Layla was doing and to determine the next step, I was told, "That MRI scan won’t be necessary." I did not feel the need to pursue any further questioning.

Have you ever been busted by one of your pets? We’d love to hear all about it!

READ MORE: Dogs, You and Your Vet, Opinion

READ MORE: Dogs, You and Your Vet, Opinion