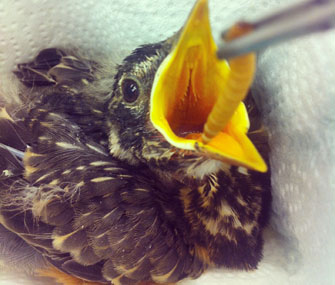 Birds have adapted in amazing ways in order to migrate long distances — but they evolved long before humans invented buildings and artificial light. Lisbeth Fuisz sees the problem this causes as a volunteer for Lights Out DC, one of many programs across North America that count birds that strike buildings during migration season.

A small troupe of dedicated bird lovers meets at 5:30 a.m. and checks for downed birds along two predetermined routes. They're trained on how to handle injured birds and have the proper permits. "Migratory birds are protected by law, so you can't just go around picking up birds," Fuisz says.

Some birds are rescued, but for many it's too late. "When I answered the ad for volunteers, it said, 'You have to be comfortable with live and dead birds,'" she says.

Their equipment is simple. Injured birds are picked up with a net and transferred to a paper bag with a napkin on the bottom for the bird to hold on to. The bag is clipped shut to keep it dark, so the bird feels safe and stays quiet. "Most birds, if they're going to recover, generally by the end of the route the bird is fluttering in the bag and you know it's ready to be released," she says. They're taken to Rock Creek Park, as far away from buildings as possible.

The dead birds are carefully recorded because the goal of Lights Out is to document the problem and persuade building owners to turn out the lights at night so they won't attract birds. And it's working. One of the D.C. group's big successes has been the Thurgood Marshall federal building, which has a beautiful glass atrium full of trees that birds try to fly into when it is lit up at night. "There was about a two-thirds reduction in the death of birds we were finding after they agreed to turn off their lights at night," she says.

Fuisz also passes on the data to scientists at the Smithsonian Migratory Bird Center. And the dead birds contribute to science in another way — they go to the Smithsonian National Museum of Natural History. "It feels good that the bird hasn't just been thrown in the trash can," she says.

Lights Out started in Toronto, where a combination of weather and geography led to mass strikes that killed hundreds of birds at the same time. But according to Christine Sheppard of the American Bird Conservancy (ABC), we now understand that the problem is much broader. It has been discovered that certain kinds of light not only attract birds, but also interfere with their magnetic navigation senses. And tall buildings at night are not the only problem.

"The one thing that we have really good data on is, it's the amount of light, not the height of the building," she says.

And homes actually kill more birds than skyscrapers — a problem that's harder to notice because it's spread out. "Everybody has seen a bird hit a window or heard a bird hit a window, and everybody thinks it's unusual," she says. "But multiply even one bird times the number of homes and small buildings in the country and you come up with 100 million."

And most strikes occur during the day, when birds mistake the reflection of the sky on glass for the actual sky.