Home ›
Our Pet Experts ›
Mikkel Becker ›
Can I Get My New Girlfriend’s Cat to Like Me?

Can I Get My New Girlfriend’s Cat to Like Me? 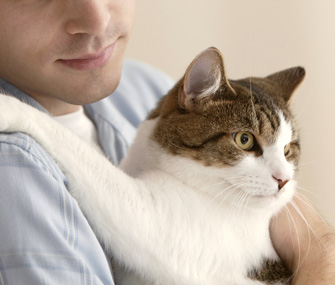 Thinkstock
Want to get your significant other's cat to accept you? Mikkel Becker has some advice on body language and tricks that really work.

Q. I’ve started dating a nice woman with a very shy cat. He didn’t make friends with either of the last two men she dated, and I’m hoping he will decide to be friends with me. How can I get him to like me — and is this even possible?


A. First of all, you have my respect for your willingness to invest in the relationship by caring about what matters to your girlfriend; in this case, her cat’s well being. Working to befriend a significant other’s pet is a wise choice: The opinion of pets seems to matter in a relationship. According to a survey of Match.com customers conducted by PetSmart Charities, 70 percent of singles think their dates’ reaction to their pet is important.

Ultimately, your girlfriend’s cat may be very skittish and never fall in love with you, but the efforts you make to befriend him will strengthen your relationship with her — and that’s good for everyone.

Her Cat May Not Appreciate Your Efforts, But She Will

The most important factor at this stage in the relationship (with the cat and with the girlfriend) will likely be how you respond to the cat. Your openness to trying different ways to win the cat’s trust, your patience with the process and your respect for your girlfriend’s bond with her cat will all be appreciated — although it may only be your girlfriend who appreciates your effort, not her cat.

Despite your best efforts, you may not succeed in making friends with the cat. I know a couple whose cat is terrified of the husband. After 10 years of marriage, the cat will still dash out of the room when he walks in. This couple said they never put any effort into changing the cat’s behavior or response to him, though; they just accepted the situation for what it was.

This doesn’t mean that the husband doesn’t like the cat or respect his wife’s bond with her cat; over the years, he has paid some extravagant medical bills without complaint and has supported his wife emotionally when the cat was ill. While he has never formed a relationship with the cat, his efforts have been meaningful to his wife and have strengthened their marriage.

Good Things Happen When You Show Up

Your girlfriend’s cat may come around in time and make friends with you on his own terms, but a little bit of training will most likely increase the odds of success. I’ve found that even the biggest scaredy cats will open up if patient efforts are made. Better yet, you won’t need to bathe in tuna or wear catnip cologne to win the feline’s stamp of approval.

To get a cat to trust and like you when you’re visiting, it’s important that the best life experiences happen when you’re around. This means that small amounts of the cat’s favorite treats — meaty and smelly treats, canned cat food, meat-based baby foods or licks of tuna — only come out when you’re visiting. Your girlfriend can dole out these treats in the beginning; once the cat becomes more comfortable with your presence, they can come directly from you. In this way, your arrival becomes a signal of good things.