Cat Health 101: Do You Know These 11 Subtle Signs of Feline Illness? 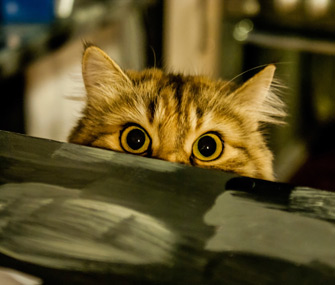 Thinkstock
Cats who used to play regularly with others but now avoid them may be reacting to a serious stressor.

Though it might not seem that way to feline aficionados, the veterinary establishment considers cats to be subtle creatures. Indeed, when it comes to displaying signs of sickness, cats are masters of obfuscation and disguise. They simply do not want news of their diminished physical state disseminated.

It’s been postulated that cats unconsciously behave this way so as not to inform predators and competitors of their current weakness. If their true condition was known, their instincts tell them, they’d lose status in their colonies or worse — they might succumb to predators.

Veterinarians are all too aware of this phenomenon. After all, not a clinical day goes by that we’re not treated to the case of a patient whose illness mysteriously managed to avoid detection.

That’s why it’s important to be on the lookout for subtle changes in your cat’s behavior that might indicate negative alterations in their health status. In-the-know cat owners are well acquainted with these. Are you? Check these out:

1. Altered interactions. Cats who used to play regularly with others but now avoid them may not just be sulking over a recent insult. In fact, they’re likely reacting to a serious stressor. Whether that’s a health-care issue or a transient environmental stress, it’s worth paying attention to. Alternatively, cats who newly engage in attention-seeking behavior may also be suffering from true medical conditions.

2. Variations in activity. Last week I saw a 16-year-old patient of mine whose owner said she’d been over the moon at his energetic behavior over the preceding few months. Now, however, Linus was throwing up, depressed and losing weight. Little did she know that an increase in activity in older cats can mean their thyroid gland is in overdrive.

The take-home message here is that any change in activity, not just the obvious slowdown, may be evidence of underlying disease.

3. Adjustments in food and water consumption. This should be a no-brainer, but the truth is that it can be hard to tell if your cat's eating less if you happen to offer her a bottomless bowl of kibble. Same goes for water consumption. That's why a watchful eye is crucial. But it's not just about how much they eat. How they eat can be every bit as important. For example, cats who adopt a messy eating style may be suffering from oral disease.

4. Unexplained weight loss or weight gain. Some cats will gain or lose weight relatively quickly with no ill effects independent of any disease state, but these are in the minority. The tough part is being aware enough of your cat’s weight to identify any significant increase or decrease. That’s why I recommend weighing or taking pictures of your kitties regularly (once monthly should work).

5. Changes in sleeping patterns. Cats who experience an alteration in their sleeping patterns — whether it’s increased wakefulness at night or longer naps during the day — should be examined for evidence of disease.

6. Altered grooming habits. If your cat’s fur starts to resemble your teenage son’s bad-hair day, you’ll doubtless want to know why. Failure to groom with regularity can signal oral disease, general malaise as a result of a wide variety of conditions, orthopedic pain, or even something as simple — but insidious — as excess poundage.

Increased grooming can also be problematic. If hair loss is evident, it’s especially so.

8. Evidence of stress. Any sign that your cat’s out of sorts — anything from inappropriate elimination to hiding or increased pacing behavior — should serve as a strong signal to see the vet.

9. Variations in vocalization. Yes, their voices can change. And while sometimes the changes can be benign, a higher pitch, greater frequency or increased degree of insistence is always grounds for a vet check.

11. Foul breath in particular. It’s not just rotting teeth, other oral infections or advanced periodontal disease, in general. Lots of things can lead to bad breath. Kidney disease and diabetes are just some examples among many.

Those are 11 well-accepted signs that something might not be copacetic for your cat. But I’m sure there are more. Do you have any to add to my list?