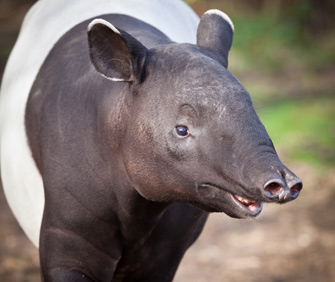 Thinkstock
The Malayan tapir is known for its distinctive black-and-white coloring and hails from Southeast Asia.

The tapir (pronounced “tey-per”) is possibly the largest mammal you’ve never heard of. Even if you’ve seen one at the zoo, you may not have known what it was. Stand in front of an exhibit, and you’ll hear visitors make all kinds of wild guesses.

“I've heard ‘pig,’ and then as soon as they see the nose, they say, ‘Oh, no — it’s an anteater,’” says Mike Dee, former general curator and curator of mammals (retired) at the Los Angeles Zoo.

“I have also heard them being referred to as ‘space horses,’” says Mandy Smith, tapir keeper at Adelaide Zoo in Australia.

Funnily enough, that description — from a joke by an Australian comedian — is the closest. Tapirs are perissodactyla or odd-toed ungulates, putting them in the same family as rhinos and horses.

“If you look at the skull or the tooth structure, it’s very similar to that of a rhinoceros or a horse, so they all came from a common ancestor at one time,” Dee says.

“Their physiology is very similar to horses, and our vets will use horse-based medication if they need to be treated for any health issues,” Smith adds.

OK, but why the piglike proboscis that’s so long that it makes people think of anteaters? Tapirs don’t root in the ground, and they don’t eat ants, but their snout does help them get at their food. Their diet is made up of fruit, leaves and bark, especially new growth, all of which can be high up on trees. “Tapirs don’t jump,” Dee says, “so with the prehensile upper lip, they can grasp things they wouldn’t [otherwise] be able to reach.” 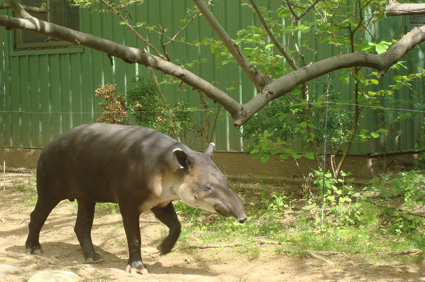 Courtesy of Linda Lombardi
Baird's tapirs can be found in various parts of South and Central America.

Tapirs are found in two parts of the world. The Malayan tapir, with its distinctive black-and-white coloring, is the largest and is found in Southeast Asia. The more subdued-looking Baird’s, mountain and lowland tapirs are found in various parts of South and Central America.

Scientists thought these four tapirs were the only species until just last year, when the discovery of a new species was announced. You’d think it would be hard for such a big animal to go undiscovered, but, in fact, tapirs are quite difficult to study in the wild. “A good friend of mine who was studying mountain tapirs — it took him forever to find his first tapir,” Dee says. “You find the tracks, the feces, you know they went through here, but you never see the actual thing.”

It wasn’t that no human had ever seen this animal; it was more a question of how closely scientists had looked. The indigenous people in Brazil and Colombia were certainly aware of it, and Teddy Roosevelt hunted one and brought it back to the United States in 1912, so there was a specimen at the American Museum of Natural History in New York. But scientists thought it was a variety of the Brazilian tapir. A paleontologist got the idea that something was up when examining tapir skulls about 10 years ago. Then a team followed up with genetic research with the help of local hunters. The new species, which is similar to the Brazilian tapir but smaller, is called Tapirus kabomani, after the name for “tapir” in the local language.