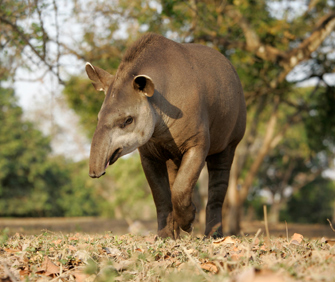 Tapirs and Their Habitat

Although tapirs are elusive, they’re essential to the forests they live in.

“Tapirs play a very important role as seed dispersers,” Smith says. “They will eat fruit, digest it and then ‘plant it’ farther away from the original source, in their manure — which provides a perfect microclimate for a new plant to establish and grow.”

Because seeds pass through the tapir’s digestive system intact and get carried to areas they wouldn’t otherwise reach, these animals are important to maintaining the diversity of the ecosystem. “Without tapirs, these plants wouldn’t be able to reproduce or grow in other areas,” Dee says.

So it’s a problem for these forests that all tapir species are included on the IUCN Red List of Threatened Species as either vulnerable or endangered. Habitat destruction is their biggest threat; human conflict and hunting in certain areas have also caused problems for some of the species.

“The area that our mountain tapirs originally came from back in 1969 in Sangay National Park — there’s agriculture all the way into the park now, so there are fewer and fewer animals,” Dee says.

Getting to Know Tapirs

Although tapirs are unfamiliar to many, Smith says, “They do have a huge cult following. Those that do know of them are infatuated.” And if you get interested in tapirs and start looking for photos of them in zoos, you’ll often see keepers getting very hands-on. Tapirs can be docile — sometimes.

“Almost all tapirs, in my experience, if you rub them underneath the chin and they’re standing, they will sit down like a dog, back feet first, and then they’ll slowly lay down and slowly roll down,” Dee says. “You can keep them down there for as long as you want as long as you keep scratching them.”

But they’re still wild animals — and they’re large, weighing about 660 pounds. They should never be kept as pets, and caution is imperative if you are ever around them. Tapirs have been known to seriously injure people, and mothers will defend their young fiercely. “They are very quiet and placid unless something frightens them, and then the ‘flight’ response kicks in and they will leave in a hurry,” Smith says. “They ... do not go around things but straight through.”

For World Tapir Day, Smith hopes more people will become infatuated with these creatures. “They are unique, amazing animals, and I believe part of my job is to raise awareness of them and the threats they face in the wild — loss of habitat and human conflict — so that people can connect, be inspired and make a difference.”

To learn more about tapirs and the goals of World Tapir Day, visit tapirday.org.