Chambered Nautilus: How Two Boys Worked to Save This Endangered Sea Creature 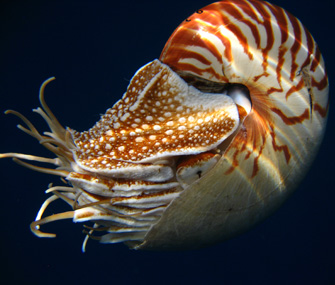 Photo by Gregory Barord
A nautilus from a research site in the Philippines just after being returned to the ocean.

Many people get upset when they hear that an animal is in danger of extinction, but most of us, at any age, assume there’s nothing we can do. Josiah Utsch thought differently a couple of years ago, when he was 11, after reading in a newspaper article that the chambered nautilus was threatened by trade in its shell. Josiah had loved the nautilus since he was 7 when, like lots of kids, he was into dinosaurs and other extinct creatures, including the spiral-shelled ammonites. “I liked nautiluses because they were related to ammonites,” he says, “and when I heard that they were maybe going extinct, I was really devastated.”

His mom, Elise Strong, admits that at first her goal was just to calm him down. “He freaked out, saying, ‘Mom, we have to do something,’” she says. “I said, ‘Go find a nautilus charity.’”

Josiah couldn’t find a nautilus organization to give his birthday money to, and a general ocean conservation group wouldn’t satisfy him. So Strong told him to write to someone mentioned in the article and ask him or her what to do. She says, “I figured he would send an email and no one was going to respond, and we’d be done.”

Instead, 15 minutes later, Josiah had an answer from Dr. Peter Ward, paleontologist and professor of geological sciences at the University of Washington. Josiah told his mom, “Dr. Ward says there is no charity — but I should start one.”

And that’s exactly what Josiah did. Since then, he and his friend Ridgely Kelly have raised $20,000 for nautilus conservation research through their organization, Save the Nautilus.

What Is a Nautilus Anyway?

The nautilus is a cephalopod, related to the octopus, squid and cuttlefish, but it’s the only living member of its group with an external shell. That is what has gotten it into trouble; its beautiful striped shell is sold for decoration and made into jewelry.

Josiah isn’t the only one who’s interested in the nautilus because of its similarity to ancient creatures, according to researcher Gregory Jeff Barord, a PhD student atthe City University of New York, Brooklyn College.

“They’re one of the oldest animals on the planet,” he says. “We think they trace back to at least 500 million years ago, and throughout that time we think the nautilus has remained the same, so lots of people call them a living fossil.”

The nautilus has far more tentacles than its relatives — more than 90 — and that comes in handy in its deep-sea habitat. “Some of their tentacles are able to kind of taste the current to find something to eat,” Barord says. “And they use most of the rest to search their habitat for prey, where it’s really dark and if you have 90 arms, it’s easier than if you just have two arms.”

Interestingly, the nautilus seems to be way more intelligent than you’d expect for such a primitive creature. Along with his advisor, Jennifer Basil, Barord studies their learning and memory in a lab where they currently house a dozen of them.

“They seem to be able to learn and memorize things,” he says. “We train them to go to a certain goal and see how they respond if we change their environment.” The nautilus can use features of its surroundings to navigate, and the lab’s work has shown that they can remember what they learn for up to two weeks.