Confessions of a Dart Frog Breeder 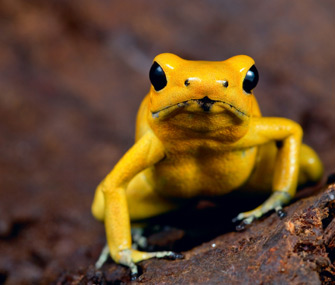 Thinkstock
The Phyllobates terribilis, which is said to be the most poisonous frog on earth, is actually a great starter dart frog.

When you talk to breeder Patrick Nabors about dart frogs, there's one thing he wants to clear up right away: Yes, dart frogs are poisonous in the wild. No, your pet dart frog will not kill you.

Take, for example, the bright yellow Phyllobates terribilis, said to be the most poisonous frog on earth. Nabors calls Phyllobates terribilis "a great starter dart frog." How is that possible? While scientists haven't worked out all the details, it appears that in the wild, these frogs get their poisons from their diets. "Phyllobates probably eats a small beetle that contains a precursor for this really toxic poison," Nabors says.

In captivity, though, Phyllobates are fed fruit flies and crickets, which don't contain these poisons. So you could hold a whole handful of these frogs and be none the worse for the experience. In fact, holding a whole handful of Phyllobates would be more harmful to the frogs than it would be to you — they have delicate skin and aren't suited for cuddling.

Nabors, who has been in the frog-breeding business since 1994, also points out that the hundreds of other species of dart frogs are far less toxic than Phyllobates. "Not only are [dart frogs] not poisonous in captivity, most of them are not especially poisonous in the wild," he says. In any case, that's hardly a property that's unique to dart frogs. "There's a lot of very poisonous frogs in the world," Nabors explains, "and very poisonous salamanders, and amphibians on the whole have a tendency to use poison as a defense against predation and bacteria."

While a dart frog won't poison you, it can make your home look nicer, and not just because of its amazing colors. Dart frogs live in specially crafted natural terrariums that may include tropical plants, orchids and mosses, as well as elaborate technology such as automatic misting systems.

These habitats were part of what attracted Nabors to the dart frog, and many of his customers seem to feel the same way. "A lot of my customers will say they spent months and months building the terrarium," Nabors says. A terrarium can be a beautiful accent to a room — and, Nabors notes, can cost many times more than the frogs who live in it.

Once you get the habitat just right, Nabors says, dart frogs are not as hard to keep as you might expect. Running a business breeding them, however, can be quite complicated.

From Egg to Frog

Raising dart frogs starts with breeding. Getting the frogs to mate is actually the easy part — it's largely a matter of providing the correct environment — with one minor hitch: "It all starts with having opposite sexes, which is more complicated than it might sound," Nabors says, "because with many frogs, it's anywhere from not abundantly obvious to impossible to tell what the gender of the frog in question is."

Once the eggs are laid, the real work starts — for the frogs and the breeder. Most types of frogs lay a large number of eggs and leave them to fend for themselves. Dart frogs, however, tend their eggs and, when they hatch, transfer the tadpoles to water. And some varieties do something even more unusual: They lay extra eggs to feed to the tadpoles.