Coop de Ville: A How-To Guide for Keeping Chickens in the City 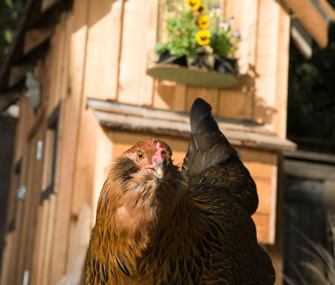 Which came first, the urban chicken farmer or the free-range egg?

These days, in places from Brooklyn to Portland, the answer may be both. Backyard chicken coops have become as de rigueur as compost piles and gluten-free diets. Celebrities like Jennifer Aniston, Reese Witherspoon and Martha Stewart even reportedly keep coops. “People mainly want chickens for two reasons: because it’s part of their culture from growing up with farm animals or because they believe in the local food movement,” says Greg Anderson, City Farms program manager for Just Food, a New York City-based nonprofit organization that promotes holistic food.

Popularity notwithstanding, chicken keeping is not to be taken lightly. Anderson got involved when he and his wife set out to establish a coop at their local Crown Heights community garden in 2008. Just Food helped them build it, and afterward they volunteered to help others (a requirement of the program). Anderson began running training sessions for Just Food and eventually took over the helm of the chicken project. “Keeping chickens is a full-time commitment — you become responsible for the lives of these animals,” he says. “That’s why we advise not going into it alone. Work with your community and your neighbors. Share the joy of having fresh eggs, so that people are inclined to help!” Since 2007, Just Food has built 19 chicken coops in urban farms, community gardens and public schools in the NYC area.

Here, Anderson offers tips on how to establish and nourish your own flourishing backyard flock.

The first step is to educate yourself. It’s important to know as much as possible about the chicken world before joining (so you don’t do anything birdbrained). There are countless resources online, including two Just Food creations: a City Farms group focused on urban agriculture and a specific City Chicken group. Through online forums like these you can meet fellow chicken keepers, attend Meetups and find resources.

In the book department, Anderson recommends How To Raise Chickens: Everything You Need To Knowby Christine Heinrichs. “She’s been working with chickens for a very long time,” he explains. “She understands the concepts of keeping them on farms and also in urban settings.”

It's also important, before you bring your chicks home to roost, to know where to take them if they need medical care. In New York City, Anderson recommends Brooklyn Cares Veterinary Clinic and the Animal Medical Center; check with chicken experts or veterinary practices in your area to find a doctor near you.

Now that you know the background of chicken keeping, ask yourself why you want the birds. Is it because you’d like to have fresh eggs daily? Do you want them as pets or as show chickens? (Yes, that’s a thing.) “That would dictate how you set up your coop with specific breeds,” Anderson explains, describing one woman who keeps her birds as pets in diapers inside her apartment. “For example, there are breeds that are more human-friendly or that lay big or small eggs.”