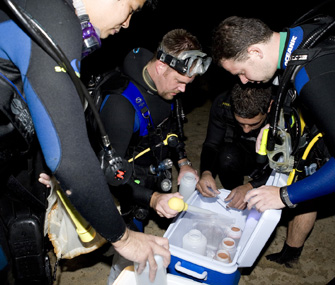 ©Shedd Aquarium/Brenna Hernandez
Shedd Aquarium employees on the beach in Puerto Rico doing field work with bottles full of egg/sperm bundles that will be separated and used to fertilize samples from other colonies.

To us, a coral reef is one of the great beauties in nature. From the coral's point of view, it's a different story. "Corals are highly aggressive toward each other. People swim on a coral reef and think it's a beautiful, tranquil place," says Mark Schick, collection manager at the Shedd Aquarium in Chicago. "It is a war zone constantly, 24 hours a day."

How can you be aggressive when you're stuck to one place your whole life? "Basically you can grow real fast, or real mean and slow," Schick says.

One technique is to grab as much of the best real estate as possible. "The most valuable property on the reef is sunlight," he says. "Some grow fast and try to shade the neighbor out."

But there are more violent tactics as well. Some corals form a long tentacle with stinging cells called nematocysts on the end. "They're cells that fire like tiny harpoons when they're touched," he says.

There's also chemical warfare — substances thrown out into the water, or more personally delivered. "They can take their stomach and stick it out anywhere on their body," he says. "There's some pretty nasty stuff in there, strong acidic conditions, and they're laying it on their neighbor."

Corals may be good at fighting each other, but there's another battle they can't fight alone. With the SECORE Foundation, Schick works on the conservation of the elkhorn coral."It was the main reef-building coral in the Caribbean up until about 30 years ago," he says. "Now it's 95 percent to 97 percent gone."

While there are a lot of theories about the decline, scientists aren't sure what's causing it. What is certain is that the fewer corals there are, the harder it is for them to reproduce. This might be true of any animal, but particularly one that is stuck in one place for life.

So scientists are working on breeding them in captivity for reintroduction to the wild — but it's quite different from the process for more familiar animals.

To start, yes, corals are animals. "Animals at some point in their life have to be able to move on their own, and they cannot create their own food source," Schick says.

Corals fit the first part of the definition because they start out as larvae that swim around for a couple of days before settling down permanently and growing their hard exoskeletons.