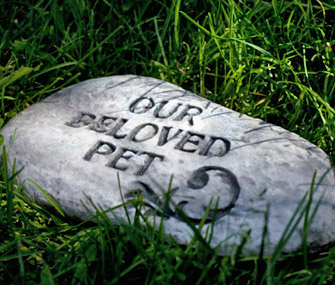 I deal in death daily. And I’m not alone. Most veterinarians I know are astute students of death. Creepy, unconventional or unwanted as that may seem, it's true. We veterinarians are probably more fluent in the subject of death than any single other professional you can think of –– mortuaries included. And that's because companion animal veterinarians employed in general practice spend a significant percentage of our time on death-related duties every day.

Don't believe me? Consider the time I spent on “death detail” yesterday.

I might have written a condolence note at some point during the day (or was that the day before yesterday?), but otherwise that was about it. All in all it was a pretty ordinary day, death-wise.
And it's all in a day’s work for most veterinarians I know.

This list might seem oppressively grim to you, but when you consider that I didn’t perform a traditional euthanasia all day, it’s probably not so bad as most. Plenty of days are much more filled with acute loss issues than this one. But then for me, it’s not the euthanasia procedures themselves that are so grueling, it’s the weeks-long discussions that often precede them that most vividly color my days, death-wise.

I know this post has killed whatever ray of sunshine might otherwise have illuminated your morning. And I’m sorry for that. But even veterinarians have depressing days, months, even years.

Given my midcareer impressionability (it happens to all of us at some point), is it any wonder that young veterinary students have been found to be much more likely than their medical student counterparts to experience signs of clinical depression during their course of study? I think not. And the difference lies –– if anywhere –– in the daily regimen I’ve outlined above.

After all, death dealt with so routinely and concretely is not for the delicate and sensitive. And yet delicacy and sensitivity are the traits most sought after by those who value their veterinary providers.