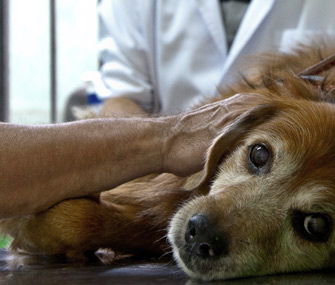 Yesterday, I spent nearly 20 minutes trying to explain to the owners of an otherwise healthy, 12-year-old dog that chronic arthritis pain, likely related to aging, was probably responsible for the gradual onset of sluggishness they’d described. It was pretty obvious on physical examination as well as on his X-rays — to the radiologist and to me, anyway.

Unfortunately, the concept of aging was lost on the owners. In fact, they took a staunch position, one I’ve become accustomed to during the course of my veterinary experience: They defended their dog’s youthfulness, arguing vehemently that age had yet to touch his body or his mind, and they assured me he'd be back to his old self in no time.

Now, in most cases I can readily convince a pet owner who’s reluctant to admit her pet is showing signs of aging by offering evidence of heart disease, arthritis and vision loss (to name a popular trio). But that isn’t always the case. Which is why I’ve had to learn that what to me is plain to see isn’t always so clear cut to others.

Most pet owners don’t have multiple years of schooling bolstered by decades of experience digesting the many subtleties of pet anatomy, physiology, pathology and behavior. I don’t expect to know the ins and outs of my clients’ professional practices, so how can I expect them to understand the intricacies of mine?

But there’s no swaying certain personalities — those of the aforementioned couple included. They dug in, arguing points as varied and diverse as to include their former dogs as examples. They’d apparently lived longer than Methuselah himself, as did all their pets. As they explained several times, this guy was only 12 and otherwise moving “just fine.” He was “just a little slow right now.”

If Dogs Could Be Forever Young

Lest you misunderstand, in describing their reactions I’m neither disrespecting the owners nor dismissing their feelings. Their approach to their dog’s currently mild misfortunes is common, comprehensible and one I can empathize with.

To be sure, a pet growing older is a topic that’s hard for most pet owners to stomach. Some owners, intent on denying the discomfiting reality of their loved one’s relatively accelerated aging process (relative to humans, that is), bar all doors to their intellect in the hopes of refusing reality. Who wants to ponder the face of death when gazing upon their loves ones? People with feelings, like yesterday’s clients, are appropriately averse to animal death. As are all of my clients (I hope). It’s normal.

Why else would there be a website dedicated to warning sensitive viewers about movies in which animals die at the end? I, for one, am grateful for doesthedogdie.com, because I’m sensitive, too. Even if I weren’t routinely exposed to death as part of my job, I’d know for sure how my clients felt. I could hardly consider myself a self-respecting veterinarian if I hadn’t loved and lost, too.

A Little Acceptance Is Helpful

All of which goes toward my clients’ state of mind. It’s evident that their psychological barrier has benefits. It is, however, an approach to life that’s not terribly helpful in a veterinary setting — indeed, in any setting where life is at stake.Which is to say, it explains their behavior but doesn’t let them off the hook in my eyes. After all, if they are to take responsibility for their pet’s health care, they should somehow be required to be rational, too.

Easier said than done, of course. Which is what re-checks are for, I guess. Wish me luck as I trudge the lonely road of veterinary hope and wade across the very wide river we call denial.