Derek Jeter Opens Up About His Puppy 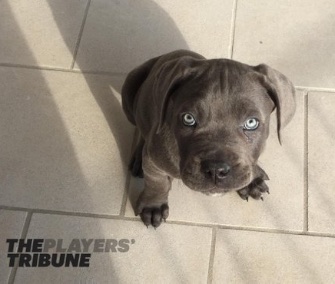 Twitter / PlayersTribune
Derek Jeter's puppy Kane is about 10 weeks old in this picture.

Former New York Yankees shortstop Derek Jeter has revealed who he’s been spending his retirement with: Kane, an Italian Mastiff. Jeter’s fiancée gave him the puppy last Christmas, and it was the ballplayer’s first dog ever. “I’ve been scared of dogs almost my entire life. I blame Cujo,” Jeter admits in an essay about Kane published Tuesday in The Players’ Tribune. “When I first got Kane, I panicked a little. I’m lying. Actually, I panicked a lot. We had some epic standoffs at the beginning. He was energetic, thought he was king of the house, and I was a nervous owner … My panicking was probably making him panic.” But as Kane turns 1 year old this month, things are different. Jeter says he’s learned a lot in the last year, and Kane has “more of a routine than I do.” They’re both a little calmer now — and they looks quite relaxed in a photo of the now 100-pound pup sitting on his owner’s lap. — Read it at The Players’ Tribune