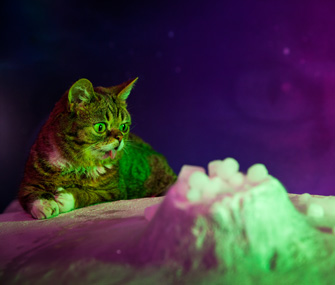 She has no teeth, extra toes, and will never grow any larger than a kitten. She’s Lil Bub — and since November 2011, she’s won the hearts of millions on the Internet.

On Thursday, April 18, this small-screen star will make the leap to the big screen at the Tribeca Film Festival in New York City — all thanks to Vice, a media company best known for reporting on Liberian warlords and sending Dennis Rodman to North Korea.

Vice’s documentary, Lil Bub & Friendz, takes a behind-the-scenes look at the world of Internet cat celebrities like Grumpy Cat, Keyboard Cat and, of course, Lil Bub — and focuses on how influential these cats are in pop culture.

Vetstreet caught up with Juliette Eisner, codirector and coproducer of the documentary, to get the scoop on what inspired Vice to delve into the world of Internet cat celebrities — and to find out if Lil Bub is as awesome in real life as she is on her blog, Youtube channel, Twitter and Facebook page.

Q. What inspired you to make a film about an Internet cat celebrity?

A. Juliette Eisner: The cat phenomenon on the Internet is not something that can be ignored; it's pretty huge, it's everywhere.

The project all started with that Internet Cat Video Festival, which was being held at one of the more acclaimed art establishments in the country. We heard about it and had to see what was going on. We really weren't expecting what we were seeing, which were more than 10,000 people at the Walker Art Center on a field watching YouTube videos. People had even traveled there from outside the country just to come to this festival.

Q. In the film's trailer, we find out that Lil Bub is from another planet. What planet is that and what sort of spaceship do we need to get there?

A. I’ll have to check with her owners, but I think the planet is called Bub-Bub-Bub. The spaceship is a very special Vice-created spaceship — you have to have VIP access in order to get on Bub's planet.

She's such an alien cat — and that's the first thing that we thought when we saw her. This cat essentially is E.T., and we’re so glad she's on our planet.