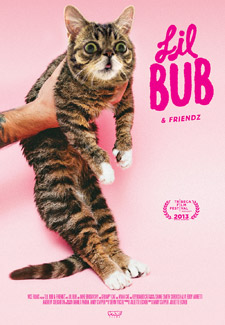 Q. Lil Bub is moving up through the ranks of cat stardom — did she have any diva moments? Any special requests while you were filming?

A. No! Bub was the least diva celebrity I've ever met. She's totally cool. Her rider was fairly easy to handle — no special requests — just the occasional nap. She was a pleasure to work with.

Q. Was there anything about the project that surprised you?

A. I think the initial shock was at that festival. We originally went to the festival for a short piece for Vice that we didn't think would be more than 10 minutes, kind of just to talk about how funny it all was. Then we saw all those people so over the top in love with cats and realized it was something that could be much bigger.

One of the other more surprising parts is that these cats are mini celebrities. Some of these cats have more Twitter followers than your average indie-rock band. When we were with Bub, people would stop and be like, "Oh, I know that cat!"

Q. What did you learn about the humans behind the famous Internet cats?

A. They're all really nice people. We happened to come across the nicest celebrity cat owners ever. They're all just having fun with it. It's fun to have your animal be super super famous. They make a lot of money from these cats, but they're also giving back to animal charities, which I think is great.

Q. Will Lil Bub be on the red carpet at the Tribeca Film Festival? What is she planning on wearing?

A. Oh, yes, she definitely will. She's going to be at the premiere, she'll walk the carpet. But Bub won’t be dressing up — she refuses to wear clothes. She's naked all the time.

Q. What's next for Lil Bub? Do you think her fame will last?

A. I definitely hope so! I know that she'll be coming out with a book. That's really exciting for her. I think that's she's being approached by a lot of different people, partially because the film is getting so much buzz from the Tribeca Film Festival. She has a long career ahead of her. She's not just a child star.