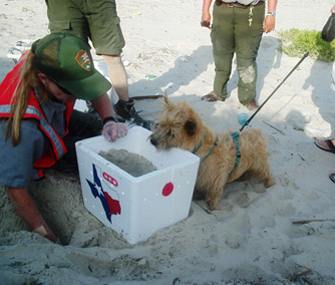 Courtesy of the U.S. National Park Service
Ridley Ranger is part of an effort to save the Kemp's Ridley, the world's most endangered sea turtle.

At the Padre Island National Seashore in Texas, there's a Cairn Terrier with a unique job: Ridley Ranger is part of an effort to save the Kemp's Ridley, the world's most endangered sea turtle.

Since 1978, sea turtle eggs laid on the beaches in the park have been collected for incubation to improve their survival, and right about now, the park service is releasing the last batch of hatchlings for this season. Ridley's help is important because the nests of this species are particularly hard to find.

Unlike species that nest at night and may wander around under cover of darkness for a few hours looking for just the right spot, the Kemp's Ridley lays eggs in the daytime. To elude predators, the turtles get in and out of the water as fast as they can, sometimes within 30 minutes. They also generally nest in large numbers at the same time (in what is called "arribada" nesting), so there's a lot going on at once in a very large area.

"We've got 80 miles of beachfront that we're patrolling every day," says Dr. Donna Shaver, chief of the park's Division of Sea Turtle Science and Recovery. "They can slip in and out between patrols."

Because they can't catch all the turtles in the act, park employees try to follow tracks in the sand to the nests, but that's not as simple as it sounds.

"It's the smallest and lightest sea turtle, so they don't leave a very deep track in the sand," Shaver says. "Another reason it's challenging is that they tend to nest on windy days, so the tracks blow away quickly."So even with all their experience and training — and day after day for months spent probing the sand with sticks trying tolocate nests— park staff could never find all the turtle eggs.

"We'd see the tracks, but they'd end in the soft sand," Shaver says. "After all the work we'd done, we were just heartsick to walk away from these sites knowing there might be eggs there and we [couldn't] protect them."

Eventually Shaver had an idea for how to find those last few nests, and in 2005, she got Ridley Ranger, a Cairn Terrier puppy.

"We started training him with 'find the treat' from the time he was a pup," she says. "He likes to eat, so he was very motivated."

Then Shaver exposed him to the work she was doing.

"He came out to the beach and saw when we found a nest and got to sniff around what the nest chamber smelled like," she says. "He watched as I placed the eggs in the incubation box, and he just sat there fascinated, enthralled by the process."