Desensitize: Getting a dog used to a scenario that causes him distress by gradually presenting the situation in a manner that does not upset the dog.

Distraction(s): Sounds, smells, sights and other stimuli that detract from a dog’s ability to remain focused or perform what’s being asked. A low-distraction environment is ideal for training.

Dominance: A dynamic, fluid relationship a dog has with another dog in a specific scenario. Dominance is not an innate personality trait but rather a means of getting preferential access to resources, including food, sleeping or resting areas, and mates. Dominance can change with different variables, including the dogs present and the resource in question. Training methods based on the notion that owner dominance is the key to good behavior often rely on fear tactics, intimidation and pain to coerce dogs to comply. This can lead to an increased risk of aggression and bites. In many cases, dogs who are labeled as “dominant” are actually fearful, insecure and conflicted. Frequently, these dogs require a behavior intervention by a veterinary behaviorist or veterinarian working in combination with a certified professional dog trainer.

Extinction burst: When previously reinforced behavior no longer works to get the desired reward, pet owners may see a surge of stronger, more intense behavior as the dog makes one last effort to get the reinforcement he seeks. A dog who has been rewarded for barking may bark with more gusto when he realizes that he’s being ignored. It is important to note that when a behavior is no longer reinforced, it can sometimes get worse — and more intense — before it fades away. 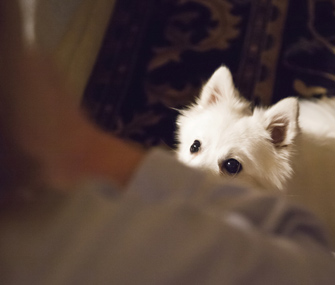 Thinkstock
Fading the lure is the process of taking the lure out of the training so the dog learns to do the behavior on another cue, such as a hand signal or word.

Fading the lure: The process of taking the lure out of the training so the dog learns to do the requested behavior on another cue, such as a hand signal or word. Fading the lure teaches the canine to do the behavior without being dependent upon a treat being in the trainer’s hand. To fade the lure, certain tricks can be used, such as keeping a treat in the hand doing the luring but rewarding with a treat given with the other hand. From there, progress to holding the hand shaped like it has a treat but with no treat inside. Next, gradually decrease the size of the hand movement needed to cue the behavior or shift the behavior to a new cue.

Fear-free or fearless vet visits: A low-stress approach popular in the veterinary community and other associated practices, like boarding, grooming and training, in which handling, interactions and procedures are done in a manner designed to keep the dog as calm as possible. Strategies include using handling and approaches that are less likely to induce fear, changing the environment, using medications when necessary and offering rewards to encourage willing cooperation from the dog. In every case, the goal is to keep the experience as positive as possible.

Flooding: A training approach sometimes used to force the dog to endure the situation in order to overcome any fears he may have. Though the goal is to overcome the urge to flee or fight to get away, it often causes a dog to freeze, flee or fight to get away. This extremely controversial tactic can cause major problems, including an increase in anxiety or aggression.

Functional analysis, or the ABC of a behavior: Functional analysis looks at three components of behavior, which are antecedent, behavior and consequence. Behavior issues can by analyzed using this approach, starting with what elicits the behavior. For a behavior like jumping on visitors, the antecedent might be a person coming through the door. The behavior is what the dog does, such as whining, jumping up and putting paws on people’s arms and legs. Finally, the consequence is what happens to the dog when he jumps up, like being petted by the visitor. The ABC analysis can help identify both the problem and the solution —in this example, the petting is reinforcing the jumping, because the dog is being rewarded for his behavior.

Generalize: A behavior is considered generalized when a dog can reliably be asked to perform the specific behavior in a variety of different contexts. For example, a dog may consistently respond to a request to sit inside the house, but this behavior may not be as reliable in a different area, such as the backyard or dog park. Dogs generalize to a certain degree, but for behaviors to be reliably performed anywhere, they need to be practiced in a wide range of circumstances.

Go to your spot: A dog who is taught to go to his spot (or station) learns to go to a specific area and wait there until he is released. A typical spot is a dog bed, a mat, a crate or a designated space in the home (the mudroom or laundry room, for example).