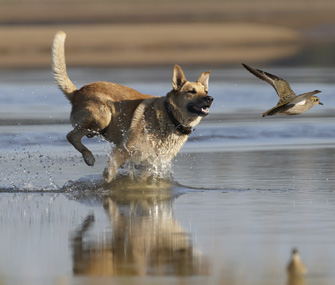 Positive reinforcement: Use of positive, desirable or pleasurable consequences to teach a behavior. An example is offering a dog a reward, such as a treat or toy for an acceptable behavior.

Punishment: Use of aversive stimuli to decrease or change a behavior. Punishment has a variety of negative consequences. Frequent use of punishment may lead the dog to fear his handler. Other unintended negative outcomes may be an escalation of the problem behavior or an increase in aggression.

Predatory behavior: Behavior that mimics hunting, capturing and consuming prey. Most dogs exhibit only minimal predatory behavior, though certain breeds retain only pieces of the predation sequence. For example, herding breeds retain the “stalk and chase” portion of the predation sequence but may not bite or engage in any takedown behaviors, as this would deter them from doing their job of herding dogs without harming.

Predatory drift: When a dog’s behavior shifts from acceptable play behavior to predatory behavior. This sometimes occurs during interactions between large and small dogs; the smaller dog squeals or runs away in fright, causing the larger dog to react to it as a prey dog. Predatory drift is one reason dog parks and doggy day cares typically maintain separate play areas for large and small dogs.

Prompt: Using extra reminders, such as pointing, treats or bigger gestures, to elicit a desired behavior when the dog fails to respond to the initial cue.

Push, drop, stick: Shorthand way to know if a dog is ready for the next step in training. Put the dog through five trials of a desired behavior. If the dog can correctly do the behavior four or five times, push to the next level of difficulty. If he gets it right two or fewer times, drop to a previous, easier level. If he gets it right three out of five times, stick to that level.

Reactive: Acting out in order to ward off or escape a stimulus, for example, other dogs or people. Reactive dogs may be more tense and worked up when separated from the stimulus by a barrier or a fence. Reactive behavior includes lunging, barking, spinning, jumping, straining on hind legs and growling. Reactivity may also be associated with aggressive tendencies; a reactive dog may escalate from warning behavior to actual snaps or bites. (See also: barrier frustration.)

Redirect: To shift a dog’s focus from an unwanted behavior to a desirable behavior. If a dog is chewing on something forbidden (a shoe or book or sofa cushion), he can be redirected to a proper chew toy. He can then be rewarded for chewing an appropriate toy, which reinforces the acceptable behavior.

Reinforcement, reward(s): A consequence the dog finds pleasurable and desirable. Reinforcement and rewards are learner dependent; some dogs will do what they are asked in return for a treat, while others may be motivated by a special toy or an extra session of play. Reinforcement and rewards are also contextual; what is reinforcing or rewarding in one situation may not be in another. For instance, a dog may find petting to be rewarding at home but may require a different reward at the dog park.

Resource guarding: When a dog is protective of his valued possessions. Common objects for resource guarding include food bowls or food puzzles and valued toys, but a dog may also guard resting spaces, rooms, people or other items the dog finds that are of value to him, including seemingly valueless things like wrappers or Kleenex. Guarding behavior can progress from warnings of unease, like freezing or snarling, to more aggressive behaviors like snapping or biting.