Home ›
Our Pet Experts ›
Dr. Patty Khuly ›
Dogs Who Love the Smell of Feces, Dead Animals and Other Disgusting Things (and the People Who Love Them)

Dogs Who Love the Smell of Feces, Dead Animals and Other Disgusting Things (and the People Who Love Them) 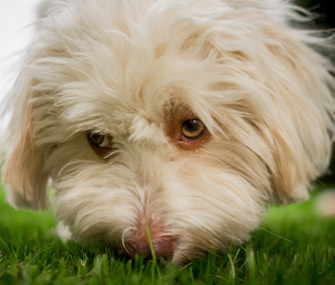 Yesterday my littlest dog, Gaston, came inside smelling like a combination of ten-day-old garbage and seven kinds of stool. Nasty— but so like him. Anytime Gaston gets the chance to flop his tiny Miniature Pinscher self onto something long dead (and maybe eat it, too), he’s in heaven.

But just because my dogs have a sense of smell 10,000 to 100,000 times better than mine doesn't mean they have better taste. Sure, they may be able to whiff out a drop of blood in a gallon of water, detect cancer cells using their noses alone, and generally make humans' sense of smell seem rudimentary by comparison, their penchant for the pungent is, well, disgusting.

A Predilection for Poop

Foul as they are, animal feces (especially those of wild carnivorous mammals such as raccoons, badgers and bears) offer dogs a scent sensation they relish and we can’t abide. So, too, for cat poo, a delicacy few dogs reject when it’s on hand.

This inexplicable behavior begs the question: Are our dogs just “nasty” creatures who don’t know any better? Or is there a good reason for their revolting conduct?

Turns out there’s almost certainly a biological rationale for our dogs’ disgusting manners. It’s been suggested by scent scientists and wildlife biologists that they relish stinky smells as a way to mask their own canine scent.

Here’s why: The strong aroma of carcasses and decay creates a sensory explosion for animals who rely on their snouts for sustenance. Rolling in dead stuff means other animals can throw predators off their trail and keep prey in the dark about their doings. All so they can eat well, unencumbered by the competition of other carnivores.