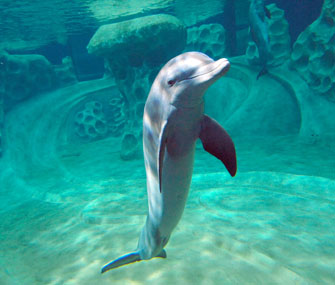 April 14 is Dolphin Appreciation Day, which is as good a time as any to learn a little something interesting about these popular mammals. Michael Hunt, the Georgia Aquarium’s director of animal training, sees the survival of the dolphin as a sign of the health of our open waters. “As a species, dolphins are a great barometer for what's going on in our oceans," Hunt says. "When you look at the number of ill and dying dolphins that have washed ashore this year alone, it drives home the point that our seas aren't in very good shape."

Lisa Takaki, senior director of marine mammals at Chicago's Shedd Aquarium, agrees. “We want to keep these species on the planet and make sure they’re here for future generations," she says.

How can we do that? Hunt suggests that "the best way to help dolphins is to learn as much as you can about the challenges they face and better appreciate and protect their habitat.”

To get you started appreciating — and supporting — dolphins, we've collected seven little-known facts about these fascinating creatures.

1. Dolphins are born with a mustache. Dolphins may look smooth, but they do have hair at one point in their lives. “When first born, they have little remnants of hair almost like a little mustache right along the top of where our upper lip would be,” Takaki says. “Because of swimming, it falls out pretty quickly.”

2. Dolphins lack vocal cords. According to Hunt, it’s inaccurate when dolphins are portrayed as making noises with their mouths because they do not have vocal cords. “All of the above-water vocalizations made by dolphins are generated exclusively via the blowhole,” he says.

3. Dolphins have “names.” Those vocalizations you hear might not just be general communication and echolocation, either. Takaki says dolphins identify themselves with a distinct, signature whistle. Each dolphin has a signature whistle that acts like a name.

4. Dolphins travel with different species. According to Takaki, some dolphins will travel to other “neighborhoods,” which often results in mixed-species pods. “The Pacific white-sided dolphin is known as being one of those species seen in the company of other dolphins and whales," she says. "It doesn’t surprise me because dolphins are friendly, gregarious and curious."

6. Dolphins may be essentially colorblind. What exactly dolphins see when it comes to colors is unclear to researchers. “Physiological studies suggest that they cannot see colors in the green spectrum based on the absence of certain cones in their eyes,” Hunt explains.“On the other hand, behavioral studies indicate that dolphins might have color vision, but scientists debate whether the animal is responding to brightness versus color.”

7. Dolphins don’t have a sense of smell. According to Hunt, dolphins also can’t smell. Their brain lacks an olfactory system that would give them this ability.

Learn more about dolphins on the websites for the Shedd Aquarium and Georgia Aquarium.