EcoDogs Sniff Out Pythons in the Everglades 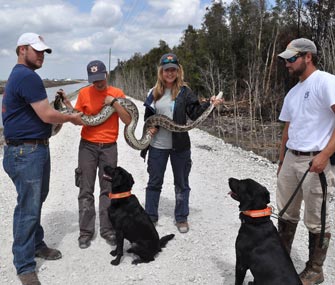 They can detect the scat of a rare animal or pick up the scent of a tree fungus that’s three feet underground. Now EcoDogs are being used to track down invasive Burmese pythons in the Florida Everglades. The pythons — many of which were released into the wild by former owners — have been wreaking havoc on the unique ecosystem of the national park. A recent study showed a sharp decline in several species of mammals in parts of the park where the snakes slither.

Christina Romagosa, who studies pythons and invasive species at Auburn University’s School of Forestry and Wildlife Sciences, says two Labs named Jake and Ivy helped capture 19 snakes, including one that was pregnant with 19 viable eggs.

“The dogs can find a snake that we would just pass over,” says Romagosa, referring to the fact that humans can have a hard time spotting a snake hidden under the cover of grass. “The dog is telling us that the snake is right at our feet — we’re standing on it.”

The EcoDogs project took place between September and May, when temps in southern Florida were more comfortable for the dogs — and when it’s typically more difficult to find snakes because they don't move around as much in balmy weather.

Craig Angle, associate director of animal health and performance at Auburn University’s Veterinary Sports Medicine Program at the College of Veterinary Medicine, oversees the health of the canines in the program and manages their trainers.

“We do a lot of conditioning with the dogs, like any athlete would,” Angle says. “We run them, swim them. It’s like a singer — they have to be in good shape and have good lung capacity to hit high notes. The dogs have to regulate their breathing to be able to properly sniff.”

Angle’s team looks for candidates who are independent and not easily distracted — like Labs. In the case of Jake and Ivy, the dogs were slowly introduced to pythons in a controlled setting, so that they’d be able to learn the snakes' smell and then safely practice their technique. In the field, the dogs are trained to alert handlers when a snake is within five meters by sitting, as seen in this video.

In 2010, the Army Corp of Engineers reached out to Auburn University for help with the pervasive snake problem in the Everglades after hearing about the school's work with canine detection research.

Before sussing out pythons, EcoDogs had been used to find targets that weren’t moving — like scat from elusive animals. The idea of using canines for conservation started three years ago when Todd Steury, a wildlife ecologist at Auburn’s School of Forestry and Wildlife Sciences, was working to collect data from long-tailed weasels and Eastern spotted skunks.

“I approached the university's Canine Detection Institute about training dogs to find wildlife poop, and they thought I was a little crazy,” Steury says. But the reality is that scat can tell researchers a lot about an animal, and it’s often much easier — and safer — to find than the creatures themselves.

Since then, the EcoDogs program has had several success stories, including a project with the University of Kentucky in which two Labs found 221 samples of data from gray fox, bobcat and coyote populations, compared to six samples found using a traditional method.

Their ability to detect a fungus that’s killing off pine trees in Alabama really shows the power of those noses. “Up until this point, the only way you knew if the trees had the fungus is if you went into the forest and saw that the trees were dying,” Steury says. “The dogs found as little as four centimeters of fungus, three feet underground.” 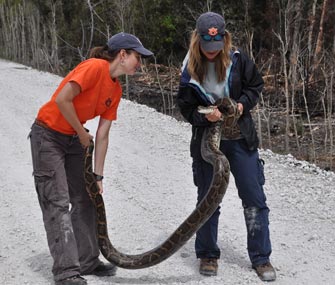 The Next Frontier for EcoDogs

Despite the program's success, the future of the Everglades python project isn’t a sure thing, as the team waits to hear whether the government will fund future python hunts for Jake and Ivy.

“We can use the dogs to suppress the [python] population,” Romagosa says. “But we’re at a point now that there’s very little chance of eradicating the species from that natural system.”

In the meantime, the EcoDogs are helping with research on the conservation of black bears and deer fawns in Alabama. This summer, they might also head to New York to work with a university that's on the prowl for minx scat.

“It’s pretty unique,” Angle says of the EcoDogs program. “If it has an odor, we can find it.”