Experts: Cats Can Get Canine Influenza 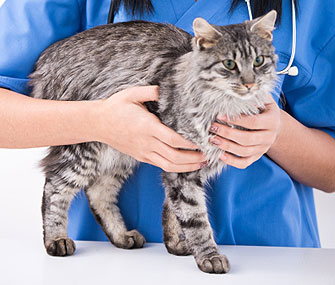 Thinkstock
The H3N2 virus has infected a group of cats at an Indiana shelter.

It may be April Fool’s Day, but this is no joke: cats can get canine influenza, too. Dr. Sandra Newbury of the University of Wisconsin School of Veterinary Medicine confirmed that the H3N2 virus, which has sickened a large number of dogs in the Midwest, has also infected a group of cats in the area. The virus was suspected in a group of cats with respiratory disease at an Indiana shelter. “While this first confirmed report of multiple cats testing positive for canine influenza in the U.S. shows the virus can affect cats, we hope that infections and illness in felines will continue to be quite rare,” Newbury said. It appears that the virus can replicate and spread from cat to cat, and the shelter where the cats were found to have it is keeping the animals quarantined. An H3N2 vaccine is now available for dogs but there is not a vaccine recommended for cats. — Read it from the University of Wisconsin-Madison