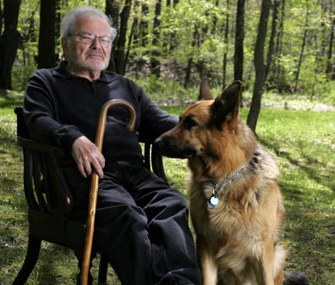 Revered children’s book author Maurice Sendak passed away on May 8 at age 83, of complications from a recent stroke. While he is best known for the children's classic Where the Wild Things Are, he also wrote and illustrated several books about animals, including Some Swell Pup or Are You Sure You Want a Dog?, Ten Little Rabbits: A Counting Book with Mino the Magician, and the Little Bear stories. In fact, the inspiration for Sendak's 1967 book, Higglety Pigglety Pop! Or There Must Be More to Life was his own dog, a Sealyham Terrier named Jennie.

If you haven't read Higglety Pigglety Pop!, the story is this: Jennie, who thinks that there must be more to life than having everything — including a master who loves her — decides to run away and embark on a journey to satisfy her discontent. In Sendak's beautifully illustrated tale, Jennie encounters many odd animals, including a pig wearing an advertising board and a cat driving a milk truck.

According to the L.A. Times, of all the books Sendak wrote, he claimed that Higglety Pigglety was his favorite.

Jennie wasn’t the only dog who inspired Sendak’s writing. When he adopted a German Shepherd several years later, the pup already came with a name, Max, which just happens to be the name of the precocious protagonist in Where the Wild Things Are. (That book also includes a dog, a West Highland Terrier, who is seen fleeing from the mischievous Max.)

Sendak’s most recent dog, Melville, also a German Shepherd, is named after one of his literary idols, Herman Melville. In 2008, The New York Times reported that Sendak told an audience at the 92nd Street Y, “I hate people.” Instead, he said, he preferred the company of dogs like Melville.

Sendak will be missed by wild — and tame — things all around the world.