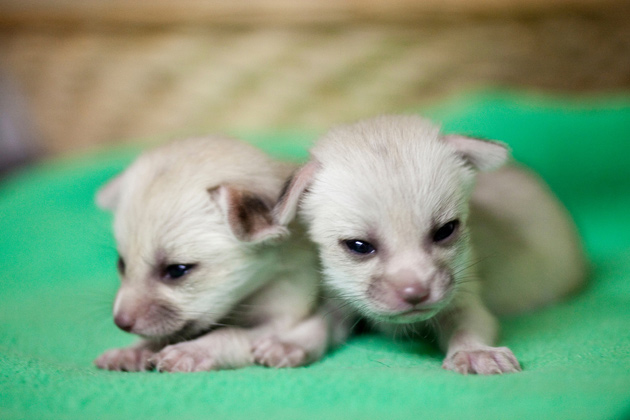 It’s been 21 long years in the making, but the Rosamond Gifford Zoo in Syracuse, N.Y., is now the proud parent of a pair of Fennec Fox kits. The duo’s fabulous long ears have a ways to grow, but even without this telltale feature, the babies sure are pink-nose adorable.

According to Zooborns, Fennecs are tough to breed, so the birth of Todd and Vixey is quite the coup for the zoo. The foxes are part of a Species Survival Plan, which helps to ensure that they thrive, thanks to collaborative efforts between zoos and the Association of Zoos and Aquariums.

Todd and his sister, Vixey, will be on display at the Syracuse zoo for the next few months. Once they reach maturity at the ripe old age of about 6 to 9 months, they’ll be relocated to other zoos.

Now back to those button noses . . . When Fennecs roam in their natural desert habitats throughout North Africa and the Arabian and Sinai peninsulas, they’ll wrap their bushy tails around their noses to keep toasty when the temps drop at night.

How cute is that?!