Home ›
Our Pet Experts ›
Linda Lombardi ›
Ferret Facts: What You Don't Know About These Clever Creatures

Ferret Facts: What You Don't Know About These Clever Creatures 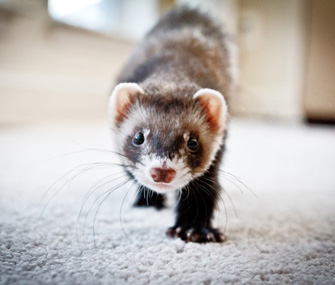 Photo courtesy of Rocky's Ferret Rescue and Shelter
Ferrets may get a bad rap, but they're actually pretty cute. Meet Marita the ferret.

Ferrets are flexible and clever, which makes them good at getting into unexpected places, which can mean trouble. Because of this, both Clay and Johnson are uncomfortable when people say they're going to let a ferret roam free all over the house. What's more, you need a secure cage to prevent that from happening by accident.

"They're too smart for their own good," says Clay. "They are little engineers. They absolutely will sit back and watch how the cage is opened and closed. I've had plenty of ferrets who figured out how to open difficult latches on cages."

And then there's the expense. Ferrets are meat eaters, and their food isn't cheap. They also require a lot of veterinary care. Clay says that in her experience, nearly all ferrets will eventually get the three diseases they are genetically susceptible to: adrenal disease, insulinoma and lymphoma.

Combine that with routine preventive care, any possible accidents and the fact that exotic vets tend to be pricier: "You can expect your ferret in her lifetime of 6 to 8 years to cost you probably upwards of $1,500 in wellness and in bad health," she says.

No Need to Hold Your Nose

While people can quickly find themselves in over their heads with a ferret, one stereotypical problem is much exaggerated. When people ask Johnson if they smell, her response is: "'Please come to my house.' People walk in, and they always say, 'It doesn't smell like ferrets.'"

Although ferrets do have a particular body odor, the problem is more often cleanliness. If Johnson's house doesn't smell with more than 70 of them, anyone can keep the ferret odor at a minimum, but it does take some work.

"They poop a lot, so that litterbox fills up fast, and they don't bury it — it goes right on the surface," says Clay, "so in order to keep them as a welcome pet in any home, you have to be on top of that maintenance."

They also need cloth hammocks and sleep sacks in their cages, which have to be cleaned regularly. "Just like your own bedding, if you slept in the same bed all the time in the same sheets, they'd get stinky," she says. "Those have to be refreshed and replaced."

It's hard work to have one or two — and these rescuers care for dozens. Johnson gets up 5 hours before she goes to work as a vet tech at a veterinarian who specializes in ferrets and then does about another 3 hours of work when she gets home: cleaning, feeding, medicating and switching groups in and out of play areas. Why do it?

When asked what she loves about them, Clay says, "Ferrets dance; when they get happy, they dance across the room. And they're very gregarious. They're not independent like cats — they seek out the affection and company of a person."

Johnson says that while people sometimes say ferrets are halfway between a cat and a dog, she thinks that what's cool is that they're not like either. And she also loves to watch their playful behavior.

"When you let them out, they make this crazy little sound," she says. "They hop, they jump up and down and sideways. They're so entertaining. I always say, 'You don't need TV if you have a ferret.'"

Think a Ferret Would Be a Good Pet for You?

Clay is passionate about going to a rescue like hers instead of a pet store. You'll get expert information and advice — and a pet who suits your personality, because each ferret is unique.

"We're like Match.com," Clay says. "I know my animals. Tell me about you, andI can hook you up with the right ferret. Do you want someone calm? Do you want someone off-the-chain silly who bounces all over the place? Their personalities are developed, and I know them. There's nothing I love more than matching a ferret up with the right personality."