5 Reasons Why It’s Fun to Own Chickens 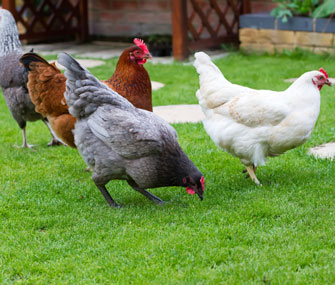 I have 10 good reasons to pen a post on chickens . . . and they all live in my backyard.

Yes, I happen to be one of those urban chicken keepers you may have read about. In particular, I’m one of a tiny but growing number of micro-farmers who put lots of eggs on the table — partly as an exercise in sustainable animal agriculture, but mostly because it’s a ton of fun.

In fact, a large percentage of the backyard chicken keepers I know are devoted to their birds not as farm animals, but as pets. These chicken lovers don’t keep roosters, and nor do I, since I don’t need babies or a 4 a.m. wake-up call. They have little interest in their hens’ egg-laying potential, and they would rather die than slaughter their beloved girls.

Although I tell my friends, neighbors, clients and readers that chickens are the coolest, easiest and most entertaining pets ever, everyone always acts like I’ve made some kind of lame joke. So this is why I'm offering five concrete reasons why you may just want to rethink your skepticism!

If you’ve never lived with a bird and you’re considering one as a pet, the domesticated chicken is the best starter bird. They’re fairly inexpensive, easy for even the greenest newbie to raise from chickhood through adulthood and they can teach you lots about avian behavior and basic biology.

The only downsides: You’ll need a little more space than you would for the average cockatiel, and zoning can be an issue — i.e., you may need a special permit or a zoning variance.

I once met a young rooster who'd drape his head over my arm. It was really sweet. And although I’d enjoyed the company of one truly bonded pet bird in the past, this one became especially attached to me quickly, which is not uncommon for hens. At times, they can be even more solicitous and affectionate than dogs and cats.

Chickens are very funny. Whether they're observed individually or as a flock, their behavior offers the best kind of slapstick.

Mine are hilarious first thing in the morning, when some of them congregate clucking near my front door. Once I step outside, the entire flock runs headlong toward me at warp chicken speed in advance of a handout. (And there is nothing funnier than a chicken on a mission.) Post-feeding, more high jinks ensue. With them, every movement and every interaction offer an opportunity for extreme silliness.