For One Deaf Dog, Parole Meant a Fresh Start

Courtesy of the Missouri Department of Corrections

Life has not always been easy for Sparky (née Zeus) the Dachshund. In fact, his story rivals Little Orphan Annie’s: The pup was born deaf to a breeder, who had little use for an impaired charge. Sparky narrowly escaped being euthanized and ended up at a shelter, where no one would adopt him because of his challenges.

That’s when an unlikely turn of events changed his life forever: Sparky went to jail.

More specifically, Sparky was enrolled in Puppies for Parole, an inmate dog-training program that launched in 2010 under George Lombardi, director of the Missouri Department of Corrections.

Initially, Lombardi was approached by a St. Louis-based organization called C.H.A.M.P. (or Canine Helpers Allow More Possibilities), which suggested that female inmates might be able to help train their service dogs. They ended up helping more than 60 pups and countless prisoners. 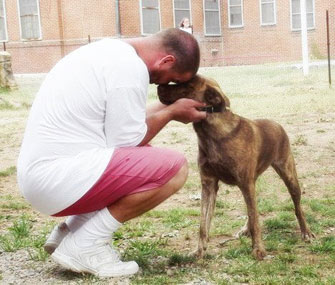 Courtesy of the Missouri Department of Corrections
Annie the dog shows some love to her handler.

The experience was so positive that, in 2010, the now prison director sat down with Missouri’s 20 wardens and floated the idea of partnering on a larger scale with local shelters to have offenders of both genders help train dogs, rendering them more adoptable. “I was so impressed not only by the output of all these great dogs, but also by the effect of the experience on the inmates and the prison culture as a whole,” he enthuses. “Unfortunately, our state has a real puppy mill problem, so the shelters are overrun.” The state’s most senior warden — in charge of the oldest prison west of the Mississippi — stepped up right away to join, and incrementally the others followed suit. The first Puppies for Parole dog walked into the maximum-security Jefferson City Correctional Center on Feb. 1, 2010. Six months ago, the 19th prison came on board. (The 20th is a Diagnostic Center and isn’t really an option.)

Puppies for Parole in Action

At last count, Missouri’s Puppies for Parole program has helped train, socialize and AKC (American Kennel Club) certify more than 2,200 dogs, and it's the only program in the country with every applicable prison involved. “The program helps dogs who may be about to be euthanized or have been stuck unadopted in shelters for a long time,” Lombardi says. “They’re not aggressive animals, but they might be three-legged, blind or deaf. We had two who were shot in the side of the head that the guys helped nurse back to health.”

Puppies for Parole receives food thanks to support from a local Royal Canin dog food plant manager. Generally, two inmates live together with a crated dog in their cell, so — based on guidance and mentoring from volunteer outside trainers — they care for the animal constantly: That means teaching house training, socialization with people and eventually other dogs in a designated area, trust exercises, leash walking and commands. The basic program lasts eight to 12 weeks, though some pups require two cycles.

Courtesy of the Missouri Department of Corrections
Inmate handlers at the Algoa Correctional Center release one balloon for every dog saved by their program.

Lombardi describes the service as a kind of “restorative justice program,” a way for offenders to give back to the community. But it also seems to promote compassion in the prisoners themselves. “Dogs don’t care who you are or that you went to prison; they just love you,” he notes. That can be an invaluable relationship for those who feel disenfranchised.

Several of the facilities hold regular graduation events for the dogs. In some cases, they even make caps for the pups, and the ceremony involves an inmate handler removing his leash from the dog’s collar and letting the new adopter slip theirs on. “It’s very touching,” Lombardi says. “The inmates take great pride in the dogs’ transformations into beautiful pets, who will respond to commands and love their families. We’ve even had offenders speak, like at high school commencements. Very powerful words.”