Forget Fido, Even Owning a Pet Fish Can Improve Your Health 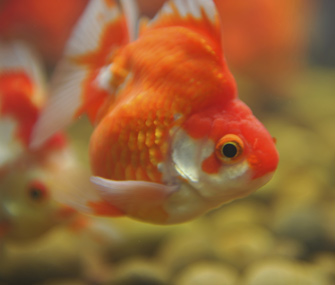 Recently, James Wathen, a 73-year-old Kentucky man, lay in his hospital bed at death’s door. He had stopped eating and given up. But when nurses reunited him with his one-eyed Chihuahua, Bubba, Wathen rebounded, according to a report on Today.

This heartwarming story is an example of the undeniable power of the bond between people and their dogs. But the benefits of having animals in your life isn't only limited to owning dogs. A new surveyby theHuman Animal Bond Research Initiative found that 97 percent of 1,000 family doctors andpractitionerssurveyed said that they believed there were health benefits in owning pets in general. 75 percent of physicians said they saw one or more of their patients' overall health improve, and 87 percent said their patients’ mood or outlook improved.

“When you pet a dog, there’s an oxytocin [or ‘the bonding hormone’] release,” explains Alan Beck, professor and director at Purdue University’s Center for the Human-Animal Bond in Indiana. “But different companion animals help in different ways, depending on our interests, needs and lifestyles. That’s why you have bird people, fish people, cat people. There’s a lot of evidence that pet interaction in general has very positive health benefits.”

Sandra Barker, Ph.D., NCC, LPC, professor of psychiatry and director of the School of Medicine Center for Human-Animal Interaction at Virginia Commonwealth University in Richmond adds, “There are pockets of research [that support the health benefits of pet ownership] in terms of reducing stress, depression and loneliness, but also cardiovascular benefits in terms of reduced blood pressure, heart rate variability and reduced cortisol.”


Why We Seek Out Animals

“The culture almost trains us to like animals,” Beck says. “Seventy-five percent of children’s literature features animal characters.” But he posits that our attachment is linked to base instincts and that nature is at the core of the animal-human bond. “The humans who were selected for continuing survival were those who appreciated nature and could pay attention to details: which animals you could interact with safely. In the 1980s, studies found that, for instance, surgery patients recovered faster if they had park views. So we unconsciously bring nature into our lives on demand with things like bird feeders, gardens and animal ownership.”

But “social support theory” (the scientific belief that we get emotional comfort from our animals) also plays a role. “Pets provide nonjudgmental emotional support,” Barkerexplains. “It’s not just about having a pet. It has to do with the relationship that a person has with a pet: What does that animalsymbolize? Companionship? Security? Protection? A reason to get up in the morning?”

Back in 1987, the National Institutes of Health officially acknowledged that there are behavioral and physiological benefits to the relationships between animals and humans. Various treatment programs have been developed based on that concept ever since. “Pet therapy is really just taking the benefits of pet ownership and applying them in settings that might be helpful,” Beckexplains. “If you’re alone in a nursing home, that bond is particularly useful. Animalscan ease social interaction and be trusted confidantes.”

What’s more, taking responsibility for another creature can prove beneficial. For example, Gail Melson, Ph.D., professor emerita of developmental studies at Purdue University, suggests that nurturing a pet (walking a dog or feeding a cat or fish) can be an important lesson in caregiving for children, especially young boys who might otherwise consider caregiving “girl stuff.” But it isn’t just good for children. Says Beck, “We never outgrow our nurturing behaviors. Pets allow us to be caregivers again.” And feeling needed or capable builds confidence.

One of the more important non-dog-related animal-assisted therapy options, according to Beck, is therapeutic horseback riding. We’re not all lucky enough to have our own horses as pets, but — for those who do or even those who have the chance to ride regularly — benefits vary, from increased confidence to improved range of motion.