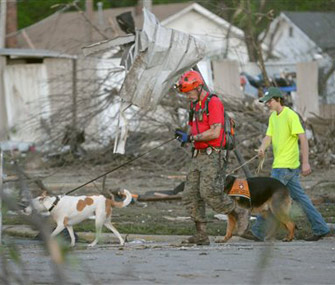 The Joplin Globe, Roger Nomer / AP
A K-9 rescue unit walks along a street in Baxter Spring, Kan., after it was hit by a tornado on Sunday.

On Sunday, a deadly tornado outbreak struck Arkansas, Oklahoma and Iowa, killing at least 18 people. As rescuers search for survivors, some people are taking to social media to find missing loved ones — including lost pets and animals.

One resource is the Arkansas Lost and Found Pet Network, a website created in 2010 that uses social media to find lost pets. On Sunday, the organization created a Facebook group to help reunite owners and animals displaced by tornadoes. So far, the group has more than 1,100 members, including pet owners who hope to locate missing animals and local residents who have found pets. Members of the group are sharing information about lost and found pets, as well as shelters, animal rescues and animal hospitals that are taking in displaced animals.

More and more frequently, we see that when disaster strikes, Facebook becomes a valuable — and viable — way to reunite lost animals with their owners. We spoke with animal lovers and experts who have relied on social media to find lost pets to see what advice they have for using the Internet to track down missing animals. 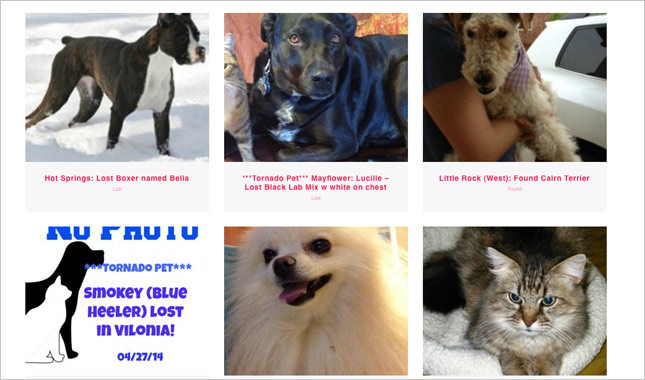 Getting the Word Out

In December 2012, Debbie Wimsatt started Lost and Found Pets of Lexington, Ky, a Facebook page dedicated to helping find lost pets in her hometown. When Wimsatt searched for social media sites that focused on lost and found pets, she came up empty.

The ability of social media sites to reach large numbers of people quickly appealed to Wimsatt. “Social media is the way to go because of exposure rates and how fast you can get your word out instead of going door to door,” she says. “You still have to do physical work; you still have to post flyers, signs, etc. This is a way to carry the message farther and faster.”

The community site’s growing fan base exemplifies the ability of social media to reach large audiences. Wimsatt's Facebook page currently has nearly 7,000 followers, and Wimsatt estimates that information shared on the page has helped to find 25 to 30 pets.

“My goal is for more people to follow this page and have more communities doing this,” Wimsatt says. “The key is changing how we network on behalf of our animals, how we care for our animals, and how we treat our animals. It is really about connecting through your community.”

Other communities have set up online sites to help locate lost pets as well. The McClain County Animal Response Team Facebook page was created in May 2011 to help animals affected by emergencies. Donnell Weatherall, deputy director of McClain County, Okla., emergency management, created the page in collaboration with the state-run site for McClain County. The page is used not only in times of disaster but is also continually monitored for missing pets in the community. After the 2013 tornado in Moore, Okla. (in neighboring Cleveland County), the page helped reunite separated owners and pets.

“There’s a lot of work to be done, but it definitely has potential. It has proved itself to be useful, and it has united a lot of owners and pets,” Weatherall says.