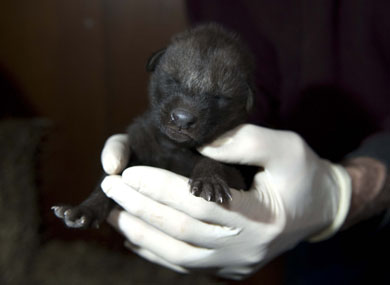 One in two maned wolf pups don't make it past their first month of life, so four little ones in Virginia must have some luck on their side — all four of the pups born on January 5 are thriving at the Smithsonian Conservation Biology Institute in Front Royal, Virginia. This litter, which brings the institute's maned wolf population to 12, will help researchers sustain the wolf population under human care, according to a recent news release by the institute. The pups' mother is eight-year-old Salina, and their father is four-year-old Nopal, who is ranked the tenth most genetically valuable male among reproducing maned wolves.

“Every pup born here helps us understand more about the biology of this incredible species,” says Nucharin Songsasen, an SCBI research biologist. “SCBI has a long history with the maned wolf, both in terms of studying the biology and maintaining the genetic diversity of individuals living under human care, as well as in conserving the animals in the wild.” 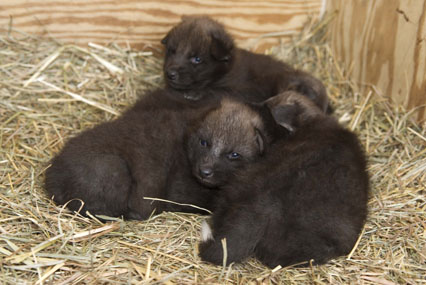 Maned wolves are native to central South America, where only about 20,000 live in the wild. The International Union for Conservation of Nature categorizes the species as near threatened. Under human care, reproductive challenges have plagued the animals, partially due to gastrointestinal disorders that may be linked to diet. Salina and Nopal are participating in a study to find out if a plant-based diet, which more closely resembles the diet of wild maned wolves, could boost reproductive rates.

“To keep a high level of gene diversity, it is important that every genetically valuable individual reproduce,” says Melissa Rodden, coordinator of the Maned Wolf Species Survival Plan. “SCBI is leading the research on innovative tools that will help us ensure that will happen.”