Home ›
Our Pet Experts ›
Amy Sinatra Ayres ›
From Boxing Champ to Slum Dog Advocate: The Woman Behind The Sato Project

From Boxing Champ to Slum Dog Advocate: The Woman Behind The Sato Project 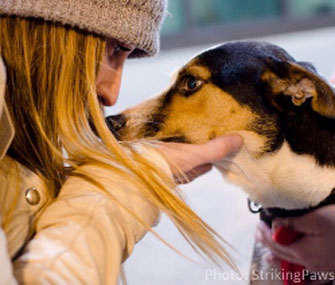 Sophie Gamand, Striking Paws
Christina Beckles with one of her rescue dogs.

Christina Beckles, a British-born former champion amateur boxer, has spent the last six years working to save the lives of abandoned satos (slang for mongrels) on Puerto Rico's Dead Dog Beach — a place that’s every bit as horrific as it sounds. After volunteering for other groups, Beckles started The Sato Project last November, bringing dogs saved from the beach to the continental United States. So far, she’s managed to remove 80 dogs, placing 60 of them in new homes. (You can follow The Sato Project’s daily work on Facebook and Twitter.)

In an exclusive interview, she talks to Vetstreet about how the dogs of Puerto Rico changed her life.

Q. How did you hear about the plight of the pups at Dead Dog Beach?

A. Christina Beckles: “I first went to Puerto Rico six years ago. My husband, Bobby, who is a stuntman, was filming down there.I visited him for a week, and even before I went, he warned me about the dog situation there. 'It must be bad,' I thought. But nothing could prepare me for what I saw: usually very cute pups who sometimes chew rocks because they are so hungry.It broke our hearts. I spent the week feeding as many as I could, and on the plane home I became determined to do something. I found a couple of rescue groups working in Puerto Rico and began volunteering for them. I quit a lucrative consulting job three years ago to rescue full time.”

Q. Why do you think dogs are treated this way in Puerto Rico?

A. “I believe it is a generational issue. Grandparents are used to seeing animals living on the streets, so it becomes the norm for their children and their grandchildren.Education is key, and it needs to begin with very young children. They need to know that it is not acceptable to run over a dog in the street because it did not move out of your way quickly enough. They need to be educated about spay/neuter, regular vaccination practices and responsible pet ownership.”

Q. What are the biggest challenges you face?

A. “The biggest challenges are funds and a ‘safe house' to put the dogs in once we pull them from the beach.Currently, when we rescue dogs, they go directly to our vet’s office for a complete health assessment, vetting, vaccinations and a spay or neuter. If the vet’s office is closed, we have nowhere to put our dogs. I would like to purchase some land, where we can build kennels. But my ultimate goal is to open an eco-friendly bed and breakfast, where people can come on 'rescue' holidays and then escort dogs back to the U.S.”

Q. How much does it cost to get one dog off the beach and into a forever home?

A. “The average cost for a 'healthy' dog — heartworm free, no skin issues or mange — is $500.Then we have to transport them to the U.S., which averages $250 per crate. My husband has funded the majority of my work for the past few years. The Sato Project also has a very stringent adoption application — we turn down more people than we approve.”