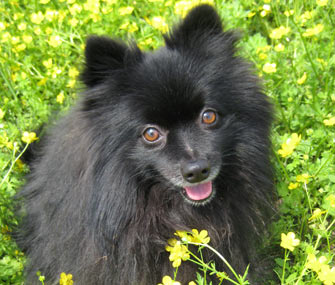 Seven years ago, Karen Barker’s 10-year-old son, Brendan, was biking in a rice field behind their house when he came across a severely matted, abandoned dog. Barker assumed that the little dog was a Terrier or Poodle mix and was shocked to discover that the pup was actually a black Pomeranian. The Barker family took in the Pom, who is now about 8 years old, and named him Elvis.

We caught up with Barker, a salesperson who lives in Alvin, Texas, to hear more about her dog’s remarkable rescue story.

Q: Can you tell us the story of how you rescued Elvis?

Karen Barker: We lived out in the country, and there was an old rice field behind our house. The farmers allowed my son to ride back there because it has hills. He was riding back there one day, then came back home and said, "Mom, there's two dogs out in the middle of the field, and someone left them there with a pile of dog food." So I went out there with him and, sure enough, there was Elvis and a Poodle out there in the middle of nowhere with a pile of dog food.

The dogs followed us home, and I put them on our porch with food and water.

When we woke up the next morning, the Poodle was gone. I think that someone might have picked him up or he ran off. We searched everywhere for the Poodle but couldn't find him. But Elvis stuck around. At the same time, I'd had a Border Collie who was 15 years old and had just passed away. So I was like, "Well, I guess we can keep him."

He had mats, terrible mats. He was so dirty. So I cleaned him up and brushed him, and I realized he was a black Pomeranian. I had never seen one before. I thought they were only red or golden.

We took Elvis to the vet right away and found out he had heartworms and a skin disease that left his skin really dry. The vet prescribed medication for the heartworms and a lotion that cleared up his skin.

Q: Do you know anything at all about his life before you found him?

A: No, not at all. He wasn't fixed or anything. He didn't have a collar on him. He had to have been maybe around a year old. His teeth were still really clean and white.

Q: Did you have to train him? Was he housebroken?

A: Yeah, he was housebroken. He was a very quick learner. I would tell him to sit and he would sit. That was the only thing he did at first. Now he sits pretty, and he gives you five.

Q: Can you tell us more about Elvis' personality?

A: He has the cutest personality. [My husband] drives a black Ford truck, and there's a million vehicles that drive by the house, but Elvis doesn't bark at one truck until he sees that black truck. He goes crazy. It's so funny. He does the same thing with my car. He knows my son's truck, too, with its old round mufflers. When he sees it round the corner, he knows it’s him right away and starts barking.