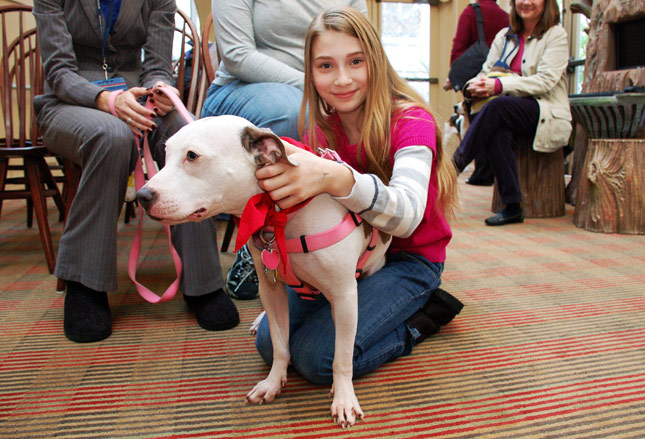 As Michele Pich took hold of the dog’s leash, the prisoner handing it to her had only one request. “Please, just promise me that you’re going to love her as much as I love her,” he said.

A few months earlier, someone surrendered the 39-pound Staffordshire Terrier mix to animal control in Philadelphia. Judging from her scarred body, Peyton had been used as a bait dog in vicious dog fighting rings. A day or two before her scheduled euthanization, a group called New Leash on Life plucked her from the shelter and brought her to a detention facility.

Once there, she took training lessons with prisoners and began the long road that would lead to her unexpected career as a therapy dog. She also got a fresh name for her fresh start: Vivian Peyton.

These days, the dog shares her home with Michele Pich, codirector of the VetPets program at the University of Pennsylvania School of Veterinary Medicine. At work, Vivian helps Pich comfort grieving pet owners and sick children at the Ronald McDonald House.

“The second I met her, I just knew that I needed her to be part of my family,” Pich says. “It was such a godsend that she was able to come out of her shell. She just needed somebody to love her and give her a chance.”

Now 2 years old and a long way from her heartbreaking past, Vivian is being honored by the National Dog Show as one of this year’s featured therapy dogs. We caught up with her owner to hear more of Vivian's story and find out how she’s handling all her newfound fame.

Q. What does it mean to be Therapy Dog Ambassador for the National Dog Show?

A. Michele Pich: "It’s an incredible honor. It’s wonderful that they’ve been including therapy dogs in the show — especially because of the work they do, they really promote the human-animal bond in such an amazing way. Just to have my little girl be part of that is pretty incredible, especially considering all the circumstances she started from."

Q. What was Vivian's life like before she was rescued?

A."It was pretty terrible. Based on the condition she was in, they were pretty sure she was used as a bait dog. She was emaciated, terribly bruised, and scarred and cut up. She was terrified of people, just scared of everything, understandably. Medically, they didn’t even think there was a good chance she was going to survive."

Q. Can you tell us about the New Leash on Life program?

A. "They pair the people in society that most people have given up on — prison inmates — with dogs that are at risk of euthanasia. That’s one of the criteria for dogs coming into the program, that they’re on the euthanasia list. So they pair the people and dogs that have often been thrown away by society, and give them another chance to shine and succeed by being a part of each other’s lives. Working one-on-one with an inmate — it made such a huge difference for her, to shine and be who she was always meant to be." 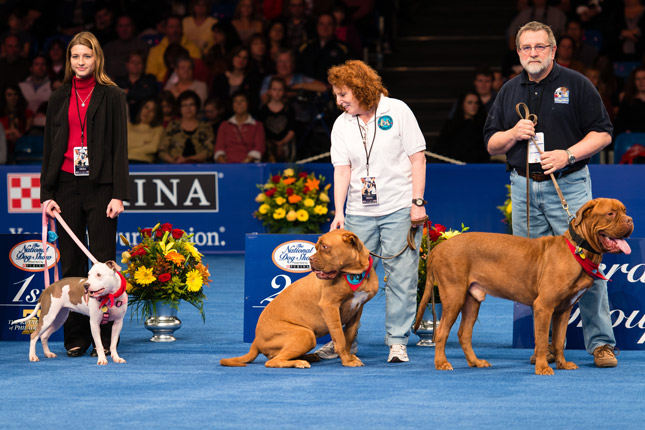 Courtesy of Jack McMahon Jr.
Vivian Peyton (left) and Michele Pich are honored in the National Dog Show ring, along with two other therapy dogs, Lil' Abner and Stella.

Q. When did you realize Vivian would make a great therapy dog?

A."The first day I met her. I had taken my veterinary students to help socialize the prison dogs, to get the dogs used to other environments. All the dogs there were good, but they were nervous. Except for Peyton over there. There she is, laying on her back, belly up, smiling at everybody. That was my first clue that she was going to be able to adapt to most environments."

Q. What's a typical working day like for Vivian?

A. "Wednesdays tend to be her busiest day. We come into work in the morning, and she greets the clients I’m working with. Then we go to the Ronald McDonald House, and all the kids know that Vivian is here on Wednesdays. Sometimes they schedule their treatments around being at the house on a Wednesday, so they have something to look forward to at the end of the night."

Q. What did Vivian think of her first time at the National Dog Show? Has all the fame gone to her head?

A. "She was great, I'll tell ya! She certainly had never been to a dog show before. It was a new experience for both of us. I was so proud of her — she was hamming it up with everybody, flirting with everybody. She did great with all the other dogs, and everyone was just so excited to see her. She was fantastic."