Home ›
Our Pet Experts ›
Linda Fiorella ›
From the Gas Chamber to the Good Life: Checking In on Daniel the Wonder Beagle

From the Gas Chamber to the Good Life: Checking In on Daniel the Wonder Beagle 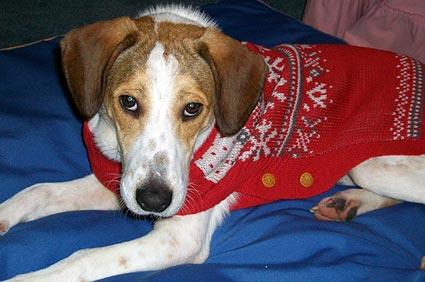 Courtesy of Joe Dwyer
Daniel the Beagle now lives with a loving family in New Jersey.

Daniel’s miraculous story began on October 3, 2011, when the abandoned Beagle mix, along with 17 other dogs, was placed in a gas chamber to be euthanized at an Alabama shelter. But just 17 minutes later, the shelter's staff was shocked to see that the Beagle had somehow managed to stay alive — becoming an instant media darling.

Daniel was named after the biblical figure who survived a night spent in a den of lions, which is a fitting moniker for the plucky pup who has since been adopted by a family in Nutley, N.J. He now shares a home with Joe Dwyer, his wife, his daughter and their four dogs — two inseparable Dachshunds, Rommel and Greta; a Pit Bull mix named Shelby; and another Beagle mix, Spartacus, the good-hearted alpha of the bunch.

It was actually Sparty’s history of abuse and neglect that inspired Joe “to become a dog trainer to help Daniel and others like him with struggles." In other words, this dog could not have found a better home.

“Daniel has adjusted well and is making his way into the hierarchy of the pack,” says Joe, who describes the new addition to his family as “a very good dog.” In fact, within days of Daniel's arrival, the entire Dwyer canine clan was playing and napping on pillows together. “With a few exceptions, animals do work it out much better than we do,” Joe says. “That's a good lesson to us humans.” 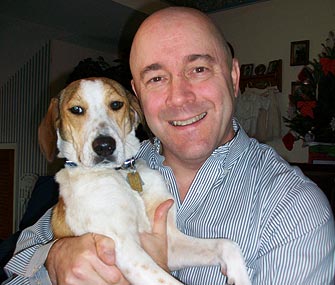 The Dwyers thought that the story would, well, die once they brought the Beagle home, but it turns out this tale still has legs. “More legs than a centipede,” Joe says.

Since the Dwyer family adopted Daniel, a Japanese news team did a story on him to “motivate people to be more compassionate to animals in the quake region of Japan,” and Joe tagged along when the miracle Beagle appeared on Anderson Cooper’s new talk show.

The savvy hound even has his own Twitter account (@DanielTheBeagle), Facebook page (Daniel the Beagle Dwyer) and a website. There's also talk of a documentary and a book, which Joe sees as a great way to “spread this guy’s story and help stop the use of gas chambers and encourage adoption.”

The Dwyer's Other Celebrated Canine

Daniel isn’t the only dog with a day job in this household. In 2008, the family adopted a Pit Bull from the Bloomfield Animal Shelter, where Joe volunteers. The severely injured dog was found tied to a fence at a Shell gas station — hence her name, Shelby.

Following the dog's recovery from two reconstructive surgeries to repair her damaged hind legs, the trainer in Joe noticed that Shelby had the temperament to be a therapy animal, which she proved when she passed her evaluation between surgeries.

Shelby is now a certified therapy dog who loves visiting patients in oncology wards and school kids to teach them about the pitfalls of bullying. Although she still gets reactions from people who are sometimes nervous around Pit Bulls, Shelby has a natural ability to assuage those fears. “I just let her do her job and she changes minds,” Joe says.

While Shelby’s work takes her to schools and hospitals, Daniel’s mission recently brought him to a rally in Pennsylvania in support of legislation named after him. Daniel’s Law would ban the gassing of shelter pets, a procedure that many believe to be inhumane because it can take up to 25 minutes to kill an animal. The state of Alabama has banned the practice, but the new law won’t go into effect there until 2012.

“The feel-good story centered around Daniel, but there were 17 dogs who died that night, and that’s a tragedy,” Joe says. Still, he's optimistic that there's now a steady momentum growing to ban the use of gas chambers across the country: “I'm happy that so many people are willing to come out and say something about the respect that these animals deserve.”

A Day in the Life of a Dog Named Daniel

Joe's main priority now is to balance Shelby and Daniel’s public lives with the happy home life they more than deserve. When Daniel was approached to do meet-and-greets with local politicians looking for a photo op, Joe turned them down, noting that he holds the line on anything that would exploit his dogs. Although he did agree to photos with Santa this holiday season because therequestcame from a veterinarian who donates the proceeds to a local shelter.

Joe was 11 when he got his first dog, Fritz, from a pet store. “In those days, we did not know as much [about puppy mills] as we know now. He had health issues, including epilepsy, but he was extremely smart and a very loving brother," says Joe, who was an only child and considered Fritz more sibling than pet.

This childhood bond led Joe to become a passionate animal activist, but he admits he didn't know that more than 30 states allow the gassing of shelter pets. He is, however, aware that there are plenty of people out there who are still on the fence when it comes to the issue of gas chamber euthanization. And that's where Daniel comes in. “Those eyes, the attitude,” Joe says. “This dog is a handsome guy.”