Get Ready for the Westminster Dog Show 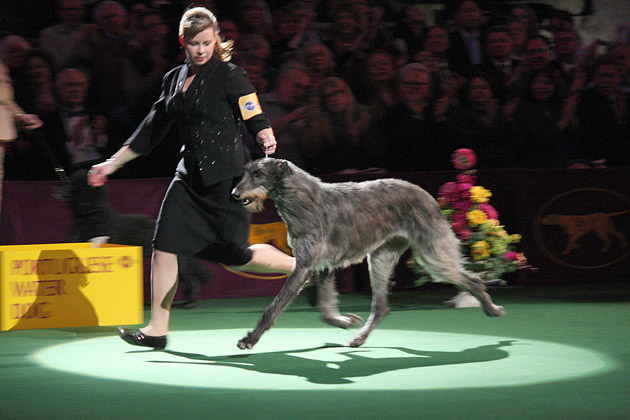 As the second oldest sporting event in the country (the Kentucky Derby has it beat by just two years), the Westminster Kennel Club Dog Show is one of America's greatest traditions.

The 136th Annual Dog Show, taking place Monday, Feb. 13, and Tuesday, Feb. 14, at Madison Square Garden, will feature contestants from all but three states — and 185 dog breeds and varieties.

David Frei, who has been announcing the Westminster Dog Show for the past 23 years, insists that his love for the show hasn't diminished one bit. "I'm the luckiest guy in the world," he says.

Frei isn't the only familiar name involved with next week's event — lifestyle doyenne Martha Stewart will once again show a dog in the ring. Her Chow Chow, CH. Pazzazz's Genghis Khan (call name GK), is the grandson of her late Paw Paw and the son of last year's Chow Chow breed winner at Westminster.

The Best In Show judge this year is Cindy Vogels, who has judged dog shows throughout the world. "The thrill of being asked [to be Best in Show judge at Westminster] is memorable," she says. "I hope to live up to everyone’s expectations, including my own!"

Vogels also offers some insight into how to watch the show, noting that it's important to keep in mind that the dogs are not being judged against one another, but against a written breed standard. The dog who most closely matches that standard is the winner.

And that brings up another important point for viewers: When it comes to show dogs, not all breeds are prancy and adoring. While they're expected to behave appropriately in the ring, a Scottish Deerhound like Hickory, last year's winner, will by nature behave in a less showy manner than, say, a Golden Retriever.

Breed judging highlight videos will be available all day Monday and Tuesday, as well as after the show, on the Westminster website.