Get to Know the Wildlife in Your Own Backyard 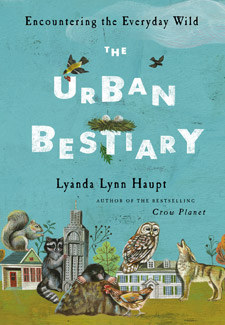 A bestiary is a collection of stories about real and imagined animals. Dating back to the Middle Ages, bestiaries also offered commentary on the moral significance each animal was believed to embody.

The Urban Bestiary: Encountering the Everyday Wild is a modern take on this ancient form, combining folklore, poetry and history with notes on animal behavior and how to identify scat. While not as allegorical as its medieval predecessors, this is not your typical nature book. We talked to author Lyanda Lynn Haupt about what it means to live with the creatures that surround us every day.

Q. How do you see the balance between urbanization and wildlife?

A. Lyanda Lynn Haupt: People that are more on the animal's side say: They were here first, it's their place, so we should bend over backward to allow their presence. The other side says: They're dangerous, they're rabid, they don't belong here. I think both of those views are oversimplified. Even though it's true that they were here first, sometimes cohabitation is just too complicated. We can't live with bears, we can't live with cougars, it's too dangerous. We have to find ways to allow those animals to flourish in their places.

But there are all kinds of wild creatures that are more adaptable, that really can make their homes in human places. A lot of animals are here because we create the perfect places for them. The most common crow in our cities is the American crow, and nowadays they're hardly ever found where there are not humans. And that's because although they don't like us in particular — they're wary of us and they don't like our cars and they don't like our dogs — they do like our garbage cans. We provide so much safe free food for them. The pickings are too good — why would they go anywhere else?

Q. You also point out that there are animals who are actually here because we put them here.

A. Starlings and house sparrows — some of the most abundant species in North America — were intentionally introduced by acclimatization societies that wanted the settlers to experience the birds and the birdsong they were homesick for.

Starlings especially have an interesting story. The societies thought it would be a literary and noble thing to do to introduce all the species mentioned in the Shakespearean canon, and in Henry IV he mentions a starling that learned to talk. It's that one line by the great bard that led to the introduction of starlings and their taking over of North America.

Q. So, as far as coexistence, bears are out, starlings are in. How about coyotes?

A. Humans have always lived alongside coyotes, but human development is reaching so deeply into the last remaining habitat, so coyotes are needing to adapt to a more chopped-up habitat where humans live nearby. One really interesting thing to me is that they've really changed the way they live in order to live alongside us. In a more rural place, they'd wake and sleep throughout the day. They'd be out and busy more of the day. In urban places, in order to avoid us, they've become more nocturnal.

It's a human obligation to make sure we secure our garbage, bring our pets in, and if you see a coyote, as much as we might long to observe it, the kindest thing to do in terms of coexistence is to chase it away. The continued wariness that coyotes have around us is the best hope for humans to accept them living around us.