Giant Turtles Divorce After 115 Years Together 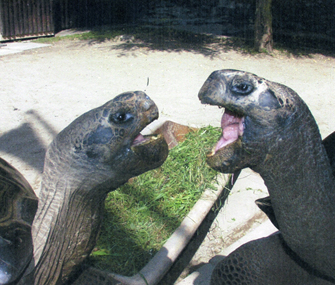 Courtesy of Reptilienzoo HAPP
After being together for over a century, giant turtles Bibi and Poldi are breaking up.

Bibi and Poldi are calling it quits after 115 years — and their split doesn't sound amicable.

Not only does the giant turtle pair refuse to share the same cage at Reptilienzoo HAPP in Klagenfurt, Austria, but Bibi took a chunk out of her partner’s shell and repeatedly attacked him until zoo officials finally separated them, reports the Austrian Times.

Bibi is definitely the one calling the shots in this relationship. She's the one who's instigating the fights, and she's the one who wants the cage to herself. (Who knows, next she may ask for sole custody of the great-great grandkids!)

Still, since the dueling divorcees have known each other since 1897, the zoo is hoping that this is just a little rough patch — the kind that can happen to a couple every hundred years or so. To help them rekindle the flame, concerned staffers have offered up aphrodisiacs and interactive games, reports the Austrian Times, but it's not working.

“We hope that they might find their harmony again,” Zookeeper Helga Happ said.

We don't know what Poldi did to incur the wrath of Bibi but maybe after a century, it's time to move on.