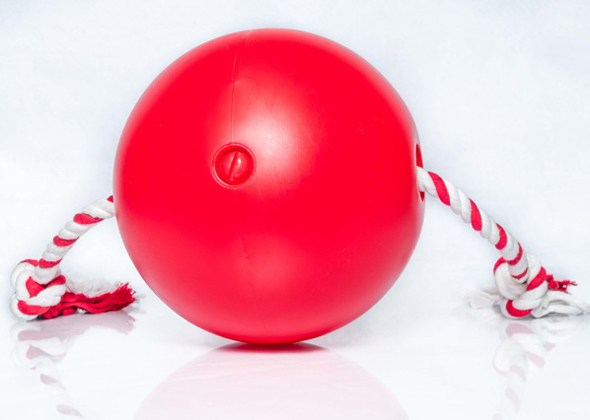 Some of the best new dog products we've seen at the Global Pet Expo this year started with nothing more than a good idea, like the Tuggo Dog Toy. Inventor Adam Harrington was sitting on his front porch, just outside of Nashville, watching his two large Boxers, Harley and Hailey, play vigorously with a bowling ball in his yard. Harrington found himself thinking about what would make the toy more fun — his dogs seemed to love the game they had invented, but appeared frustrated by their inability to get a grip on the heavy, smooth ball.

And then Harrington got an idea: He drilled a hole in the bowling ball, and tied a rope through it. The next morning, he gave the toy to his dogs and left for work.

That evening, when his mother returned home, the dogs were nowhere to be seen. This was unusual — these two enthusiastic companions love to meet people at the front door, but on this particular afternoon, there was no sign of them. Harrington’s mother had a flash of panic — she was sure the dogs had been stolen.

Fortunately, Harley and Hailey were soon discovered sound asleep in the bedroom. The bowling ball–rope toy, on the other hand, was an acre away, where it had rolled beyond the invisible fence, thus ending what was clearly an exciting game for the Boxers.

Clearly, Harrington was onto something. He created a prototype, which he called the Tuggo Dog Toy, based on his bowling ball and rope; it consists of a hard plastic ball with a rope through it. The ball is smooth, like a bowling ball, and both pieces are extremely durable. The weight of the ball can be adjusted by filling it with water — completely full, it weighs 20 pounds (and makes a satisfying sloshing sound during playtime). Harrington took 400 Tuggo Toys to a pet expo in Tennessee and sold his entire stock in eight hours.

And the Tuggo Toy continues to be a hit with dog owners. Since opening a kiosk at the Opry Mills Mall in Nashville two weeks ago, Harrington has sold over 1,000 toys.

The ball, available in red or blue, is 10 inches in diameter; a 7-inch version is in development.

Tuggo Toy, available at at the Opry Mills Mall and at TuggoDogToy.com (where shipping is free for a limited time) for $29.99

Check out other exciting new pet products at our Global Pet Expo 2014 hub.