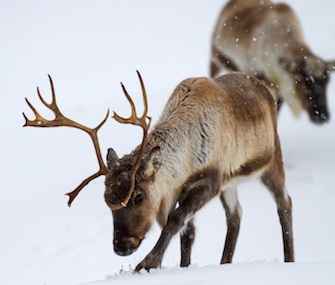 A new study finds that ecosystems, local economies and climate change could be impacted as reindeer populations decline around the world. "In northern Europe (such as in Finland, Sweden and Norway), Asia (Russia, Mongolia and China) and North America (Canada and Alaska), reindeer populations have been declining for many years,” said the study’s lead author Xiuxiang Meng. The researchers cite at least six factors for the decline in reindeer populations: inbreeding; poaching for antlers; natural predators including bears, wolves and lynx; a lack of herders and breeders; climate change; and changes to the tourism industry. Reindeer are currently classified as being of “least concern” on the IUCN’s Red List, but Meng and other experts say the animal’s status needs to be updated. The study was published inJournal for Nature Conservation. — Read it at Discovery News