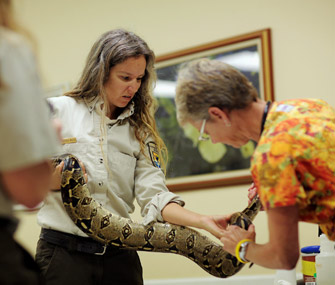 Amnesty is a legalese-y term more likely to evoke issues surrounding human rights than having anything to do with pets. Nonetheless, a few times a year here in South Florida, the Florida Fish and Wildlife Conservation Commission defies the word's traditional associations by holding an Exotic Pet Amnesty Day. Instead of releasing exotic pets into the wild, as too many South Floridians have historically done, at these events their keepers can surrender any non-native animals to the Commission, thereby avoiding penalties for illegally releasing an animal into the wild and in some cases avoiding fines for failing to hold the proper licenses required to keep certain species.

These amnesty days usually happen in October and November, just in time to remind would-be holiday pet gift-givers that exotic pets don’t make great pets for most people. How can they if so many pet owners end up either releasing them into the wild or surrendering them to the state?

While they’re undeniably educational, the most important reason for holding amnesty events is to prevent the release of these animals into the wild­­ — particularly into the Everglades.

Though it’s no stranger to threats­­ — historically in the guise of development, farmland runoff (primarily the sugar industry’s), invasive canal-clogging vegetation, and a host of others brought on by climate change — the Everglades has been besieged over the past decade by a new sort of invader: exotic pets.

It may sound like one of those trivial weird news bits where pythons and alligators duke it out in the river of grass (and perhaps that’s how it started), but this is turning into an epic environmental story in which there are big losers and no winners. The native fauna of the Everglades is literally being eaten alive by non-native invaders, most of them released exotic pets.

In fact, as of 2004, the Everglades has earned the dubious distinction of being the one place in the U.S. that hosts the highest percentage of exotic species. A full 26 percent of all the animals, birds, reptiles and fish in the Everglades come from elsewhere.

Which is bad enough. What’s worse is that some of these invasive animal species have ramped up their activities over the past decade, snakes in particular.

While snakes make up a small percentage of this country’s pets, they’re an increasingly popular pet here in South Florida. The big guys (mostly pythons and boas) are doing so well in their suburban homes that their owners are hard-pressed to know what to do with them once they reach a certain size (10 feet is too much snake for most anyone I know). Worse yet, large constrictor snakes have been known to escape their confines and severely injure and even kill their owners and others, including children.