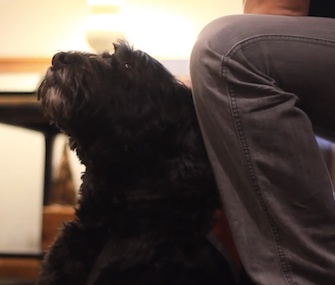 Magic, a Portuguese Water Dog, has a special trick up his sleeve.

“He makes people smile even when they don’t want to,” says Ross DeJohn Jr. of DeJohn Funeral Homes in Ohio. DeJohn and his family adopted Magic, a retired show champion who was being used for breeding, in 2008 and trained him to become a certified therapy dog. He now helps comfort DeJohn’s clients.

“He’s like a rock star at the funeral home,” DeJohn says. “People love him. People ask about him all the time.” Now DeJohn is training a Portie puppy named CoCo so she can follow in Magic’s footsteps when the 9-year-old dog retires.

Magic is one of a growing number of grief therapy dogs working in funeral homes around the country. The dogs help soothe grieving families.

“Anywhere you go where there’s pain, where there’s grief, there are therapy dogs — after disasters, tragedies, in hospice and in hospitals,” says Debra Fry, who owns Fry Funeral Home in Iowa with her husband, David. With that in mind, she thought it made perfect sense to add a therapy dog to their business. 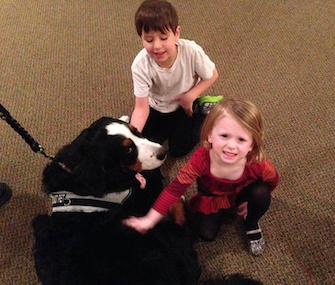 Raised in the Funeral Home

Gurt, a Bernese Mountain Dog who’s now 2 years old, made her first visit to Fry Funeral Home when she was just 9 weeks old. She has been training on the job ever since. She has been socialized to be around people, to use an “indoor bark” and even to wave goodbye to the families she helps console.

Handlers say Gurt and other dogs like her naturally know what to do to offer comfort. “Both Max and Ernie seem to intuitively know who is hurting the most, and they’ll go and plop themselves down by that person,” says Jodi Clock, who handles the Shelties at her family’s Clock Funeral Homes in Michigan.

Grief therapy dogs, who usually live with the funeral home’s owner or a staff member, are available to help while families are making arrangements, during visitation and, in some cases, during funeral services. It’s up to the families to decide whether they’d like to have the dog around and when.

Clock says her husband wasn’t sure about the idea of having therapy dogs at first, but that quickly changed when he saw how easily people took to Max, their first canine staff member.

“It’s interesting because we’ve become known as the funeral home with the dog,” Clock says. And funeral homes that provide service dogs are starting to advertise the fact: Many include their dogs in commercials (like this one with Magic) or on business cards. And the dogs have been known to become celebrities in their communities.