Guide Dogs: What Happens When They Retire? 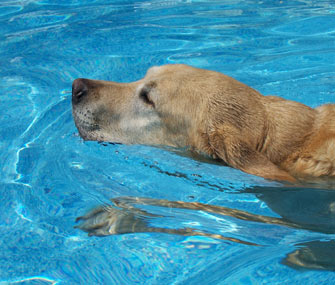 Courtesy Maureen Hopkins
Colby, 10, goes for a swim in his backyard pool in New Jersey.

Colby is enjoying retirement. On summer days, he takes a dip in the backyard pool whenever he’s hot and spends time cruising on the boat or taking strolls along the boardwalk on trips to the Jersey shore with his family. And in the winter, he vacations in Vermont, where he romps in the snow and plays with the grandchildren. Colby probably isn’t the retiree you’re picturing.

But after eight years of leading a bustling life as a Seeing Eye dog, he deserves the pampering he’s getting in his senior years from his adoptive family.

Many visually impaired owners keep their guide dogs after they hang up the harness, but it’s not an option for everyone. Some can’t afford the veterinary care that an older dog might need. Some live in apartments where only working dogs are allowed. And others have careers that require a lot of travel with a working dog, and they can’t be home to take care of a retired dog.

Turning to the Puppy Raiser

Whatever the reason, owners who find themselves in a position where they're unable to keep their guide dogs want to find the best possible home for these dogs who’ve given so much of themselves. And there’s no shortage of people willing to take them.

Sometimes it’s a friend or family member of the owner — someone whom the dog already knows. Another common situation is for the dog to be adopted by the person who voluntarily raised him as a puppy. 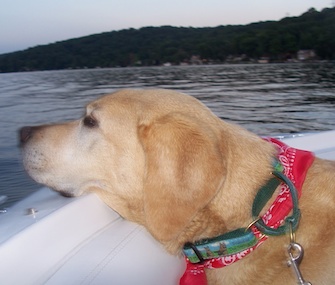 Courtesy Maureen Hopkins
Colby, who retired at age 10, goes for a boat ride in New Jersey.

That’s what happened in Colby’s case.

Maureen Hopkins says she and her husband got a call from The Seeing Eye in May, asking if they’d be willing to take the first puppy they raised for the school back to their New Jersey home.

“It took my husband and I maybe 10, 15 seconds to say yes!” Hopkins says, laughing. “Of course, him being the first one, he’s your favorite.”

Colby’s handler was the president of The Seeing Eye, James Kutsch. Colby spent a lot of his time in Morristown, N.J., where the school is located, and frequently flew with Kutsch around the country and internationally.

Colby was about a year old when Hopkins and her husband finished their portion of his upbringing and brought him back to The Seeing Eye in New Jersey to train with the professionals. The couple wondered whether the yellow Labrador Retriever, now 10, would remember them.

“I tell all my friends he’s the perfect dog,” she says. “Life is very good for Colby, that’s for sure. But I think he’s worked so hard that this is a good reward for him.” 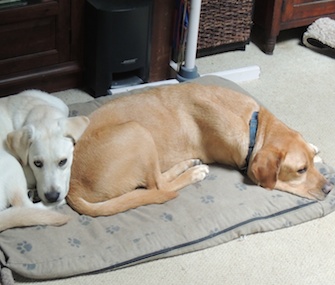 Getting a Direct Request

Last year, Suzan Bocciarelli of Ohio adopted Winslow, the first of six puppies she has raised for Guiding Eyes for the Blind in New York.

For Bocciarelli, the invitation to make Winslow her own came directly from his blind owner. The woman had had several guide dogs over the years, and Bocciarelli and her husband would visit with Winslow and his owner whenever they traveled to the school in New York.

The first time they met, Winslow’s owner asked if the Bocciarellis would be willing to take Winslow when it came time for him to retire — and they didn’t hesitate to say yes. When the handler’s health declined last year, she called them. They brought Winslow home in August, and he turned 7 in December.

He’s “pretty young for a retiree, which is nice for us,” Bocciarelli says.

“Every time we go out the door, he does look like, ‘I get to go, right?’” Bocciarelli says. But he has acclimated to kicking back — especially with other dogs in his home to keep him company. “There are four Labradors here, and he’s just one of the guys.”

Right now, he’s busy helping to raise Bocciarelli’s latest trainee. “Those two seem to be really best buddies, and I’m sure the puppy is learning things from him,” she says.