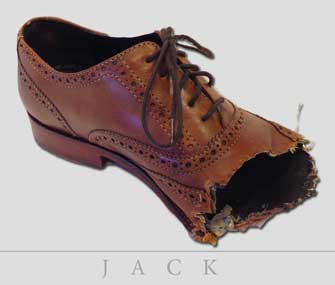 This may look like another case of a dog who couldn't distinguish between a chew toy and a very expensive dress shoe — but that's not how the shoe's owner is seeing it. The mauled footwear is currently up for sale on Ebay, in an auction titled "Half-Chewed Cole Haan Wingtip by Emerging Canine Artist, Left Shoe, Size 11.5 D." And as of right now, the bidding for this piece is at nearly $400. The artist (or, "artist") is a dog named Jack, a 2-year-old Dalmatian mix. "Jack has been active for some time in the world of artistic defacement popularized by prominent figures such as Banksy," his owner writes in the auction's description.

"Some of his earlier performance and mixed-media works include Berber Carpet Removal, 400-Thread-Count Sheet Shredding No. 1, A Million Pieces of a Bluetooth Headset, Exposing the Mysterious Innards of a Couch Cushion, Urinating on My Owner's Sister's Bed, Freeing of the Garbage from the Shackles of the Glad Bag, and of course, the well-known 400-Thread-Count Sheet Shredding No. 2." 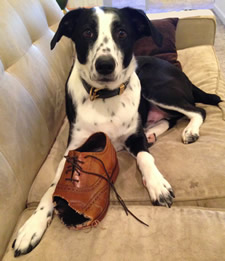 Ebay user mister_now
The artist poses with his work.

The listing, which clearly started as a joke, has turned into something else. On Monday, Jack's ower added an update to his description: "Jack's time was short when I adopted him from a kill shelter not quite a year ago. And he's not alone. Many great dogs need a second chance but far too few will find homes. Due to the overwhelming popularity of Half-Chewed and the high bids the work has generated, a respectable portion of the funds ... will be donated to a pet rescue organization in the greater Washington, D.C. area." He concludes, "Jack and I are truly humbled." Which is, of course, the point of all great art.

The auction for Half-Chewed (as the piece is now being called) ends today at 5:00 pm PST. Get your bid in now!