Happy New “Year of the Snake” 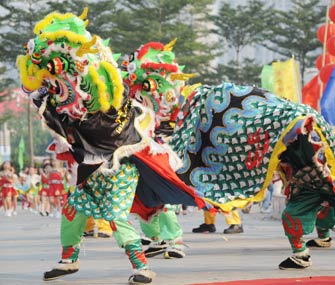 Feb. 10 marked the start of the 2013 Chinese New Year and the Year of the Snake. The new year begins on the second new moon after the Winter Solstice and is celebrated for two weeks until the moon reaches its brightest phase. What we love about this most important of the Chinese holidays, in addition to the lively celebrations, is the animals.

12 Animals in the Zodiac

Each year in the calendar is represented by a cyclical parade of a dozen animals, also known as the Chinese Zodiac. According to legend, the animals chosen for the signs came about either by invitation from Buddha (one story) or from a race conducted by the Jade Emperor.

In the latter tale, the Emperor announced that the animals chosen to represent the years would be the first 12 contestants to finish a grueling race. The last part of the race was swimming across a treacherous river. The Snake, fearing he would be swept away by the current, discreetly wrapped himself around the Horse’s hoof and hitched a ride. When they got to the other side, the snake quickly dismounted and scared the horse, thereby beating him to the finish line.

The order in which the animals completed the race is the order of the Chinese zodiac — Rat, Ox, Tiger, Rabbit, Dragon, Snake, Horse, Sheep, Monkey, Rooster, Dog and Pig. After 12 years, the cycle repeats.

Just as the Western zodiac attributes certain characteristics to people born under a sign, the animal associated with each Chinese year influences personality. How does an association with snakes translate into human qualities? Just observe the snake and his behavior, and it sneaks right up on you.

No need for “hiss-teria” about ever being called a “snake,” which is actually one of the more popular of the Chinese signs.After all, who doesn’t want to be smart, sexy and powerful? Snakes are also seen as charming and graceful.