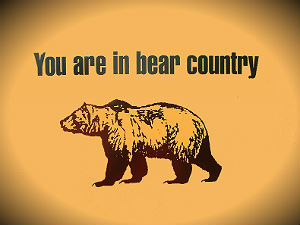 On our Almost Heaven Ranch I like to joke that it's as if Noah’s Ark unloaded here. I live halfway up a mile-high mountain at the extreme tip of Northern Idaho. When I stand on our deck and look south toward the closest town, Bonners Ferry (population 2,200), 17 miles away, over my shoulder it’s only 7 miles as the crow flies to the Canadian border.

We have moose, elk, deer, mountain caribou (the only herd in the continental United States), wolves, coyotes, cougar, bobcat, foxes, geese, ducks, heron, grouse, pheasant, wild turkeys, squirrels, chipmunks and rabbits. I even saw a river otter crossing close to our house, heading from a neighbor’s pond to the Kootenai River, which meanders through the glacial river valley below.

And yes, we have bears. I’ve seen a black bear on horseback rides, or foraging in an old orchard we can see out of kitchen window, and I have even seen one about 30 feet away from our front door. In late September I was driving the mile to the highway and saw a bear running at full speed across our road. I didn’t see the head or shoulders, but I saw the animal’s dark brown back and tawny flanks. This bear was huge: Full of summer fat and ready for upcoming hibernation, jiggling as it raced across the road. I thought it was a grizzly. While I’ve never seen one in the wild, our neighbor has seen them and even spotted a giant grizzly track about a half-mile north of our log home.

You can’t outrun a bear: They’re capable of bursts up to 35 mph. But bears do you-know-what in the woods. After the bear flashed by, I saw the dark mushy pile of bear poop and stopped to investigate and photograph. I had to show my wife (and others). How many of you have seen a steaming fresh pile of bear poop?

“Scat” is a term for excrement, especially of an animal. And up here on horseback rides, walks, drives or even doing chores we play Scat-ergories, a play on the name of the popular game, Scattergories. Squirrel and chipmunk doo look a lot alike. Moose, elk and deer have different size pellets of poo besides other differences. Cougar crap is bigger than that of a bobcat and both look like larger domestic housecat feces but often feature hair from dinner that was on the run just hours before. Wolf feces looks like big dog dung but has deer hair and bits of bone inside like semi-processed wildlife sausage. When we don’t know what we’re seeing, smelling or stepping in, we take an iPhone photo so we can look it up later in one of our Peterson Field Guide books or search online for comparison images.