Home ›
Our Pet Experts ›
Dr. Laurie Hess ›
Hedgehogs as Pets: What You Need to Know

Hedgehogs as Pets: What You Need to Know

Editor's note: Dr. Laurie Hess is a board-certified specialist in avian and exotic animal medicine and a member of the Vetstreet Veterinary Advisory Board.

A recent story on ABC's Good Morning America looked at the rise in popularity of hedgehogs as pets; the story included a video of a cat playing with — and sitting on — an African Pygmy hedgehog. While I can verify the hedgehog-as-pet trend in my own practice, I have to wonder: Is this a good thing?

The truth is, hedgehogs aren’t for everyone; they are nocturnal and like to play, run in wheels and just generally make a lot of noise at night, which may not make them the best choice for people who go to bed early or are light sleepers. When they are nervous, these cute creatures may ball up and extend their quills, especially if they are being handled by unfamiliar people or are being stressed like the hedgehog in the ABC News video above.

However, in secure situations in the hands of people they know, hedgehogs can be very interactive and curious.

Over the past 20 years, I have cared for many hedgehogs whose owners have worked hard to socialize them. These hedgehogs have been wonderful, friendly pets, closely bonded to their people.

For many exotic species kept as pets, there is a distinction between exotic animals found in the wild and domesticated exotic pets. Lions and tigers are examples of exotic wild animals that are not safe or suitable as pets. On the other hand, hedgehogs (and guinea pigs, rabbits, chinchillas, many parrots, etc.) may be found in the wild but are also now domesticated enough to be appropriate as pets in the right circumstances. 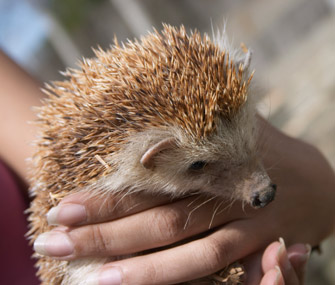 Hedgehogs are found in the wild in Europe and Africa, but those sold in the United States are bred in captivity to be kept as pets. These domesticated animals are not even necessarily of the same genetic makeup as their wild counterparts. A pet hedgehog would have no idea how to live outside on its own; unfortunately, uneducated hedgehog owners who no longer want their pets will sometimes release them outdoors, expecting them to be OK. These animals generally do not survive because they are not adapted to extreme changes in temperature, they don’t know how to find food, and they are often killed by predators.

Of course, before adopting any exotic pet, a responsible potential pet owner should learn about the animal — including its nutritional, environmental, social, behavioral and other needs — to ensure that he or she can meet the pet’s needs. Keep in mind that due to their unique needs, many exotic pets require significantly more time and attention than more traditional pets like dogs and cats. Not all exotic pets are for all people, but certainly in the right situation, with an educated and informed pet owner, exotic pets can thrive and live very happy lives, providing endless joy to the families that own them.

A Word About That Cat

If you do get a hedgehog for a pet, I don't recommend that you allow your other pets to play with it. It may seem cute to see a cat or dog meeting a hedgehog, but the hedgehog could easily be injured if the larger animal tries to pick the hedgehog up in its mouth. And while hedgehogs do not release their quills like porcupines, these quills are sharp and irritating and may injure another animal.

Individual species, such as hedgehogs, cats and dogs, also have populations of bacteria in their mouths and intestinal tracts that they should not exchange, as one could potentially make the other sick. Mixing of species is definitely not recommended!

As a veterinarian who specializes in birds and exotic pets, I find videos like this one alarming to someone like me. But it also provides a welcome opportunity to spread the word about proper care and treatment of these fascinating creatures.